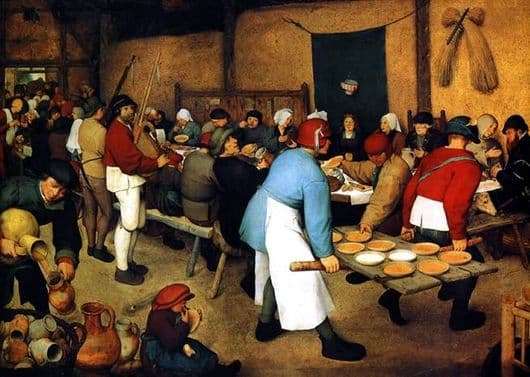 The great European artist of the Northern Renaissance, Peter Bruegel, worked in France, Brussels and Antwerp. All the plots of his paintings did not fundamentally fit into the classical iconography. They, rather, can be attributed to the satiric-allegorical type of art.

The original painting “Peasant Wedding” is painted in oil on an oak board. Like the main part of his work, the painting was transferred to the Museum of Historical Arts, in Vienna.

He always perceived life and the processes as something strange and bizarre, he perceived in his own way and specific vision of the world. This was manifested not only to personal existence, but also to all people in general, whom he had a habit of watching. Having a great sense of humor, he sang in his works and can be said to ridicule the situation with all its natural spontaneity.

This is reflected in the presented image, where a seemingly joyful event takes place. However, all the people gathered in the eyes of the absolute indifference, and none of them smiles.

A young bride, sitting alone in sadness and motionless. Everywhere some people walk, invited people sit, drink and eat, paying no attention to anyone. On the left, a man fills a jug of wine, on the other hand, carry cakes on the door removed from the hinges, using a tray instead.

All around eagerly direct their views on food.

Not far away, on the left, a child is already sitting on the floor with a cake in his hands and eating it. On it is a funny hat with brim, which partially covers the face and eyes.

Bruegel in all had the ability to emphasize the roughness and the earthiness of the peasants. The drunk and clumsy characters in the picture completely filled the living scenes on his canvases, which is the opposite of the Italian canon of a refined style of depicting people.