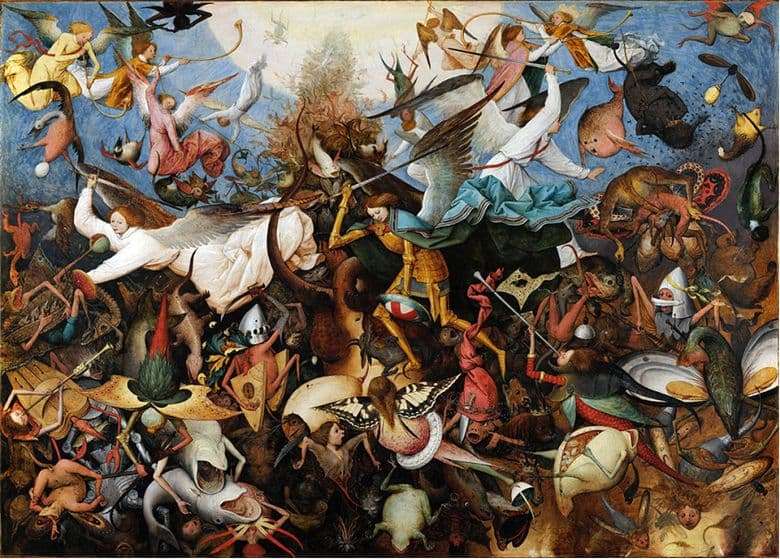 The plot is based on a biblical story about angels that rebelled in pride, symbolically reflecting the end of the world, when humanity mired in cruelty and nonsense will be doomed to ruin.

In the center of the picture is the Archangel Michael in a blue cape. With the help of a sword with a golden translucent handle, he plunges a dragon, which, in all probability, symbolizes Satan.

At the top of the image is a sparkling ball representing Heaven. Light angels fight against the dark army of the rebels against God and play the hymn of victory on the divine trumpets. The figures here are bright, clear, with detailed faces. With great virtuosity worked wings. Movement – free. The exception is falling images. Despite their white clothes and golden wings, it is clear that they are already defeated and, spreading their arms, fall limply down.

The lower half of the picture is dark and gloomy, it takes effort to distinguish between individual images. Here everything is mixed, saturated, dense and chaotic. The figures in hell lose their human appearance and turn into terrible monsters with huge mouths and claws. The faces and eyes that are still possible to discern are filled with horror, mouths open in a mad cry.

The color scheme of the lower and upper parts are different. The top is made in blue, blue, yellow and white shades. The colors are saturated, bright and glowing. The lower part is filled with dark and ominous colors. Brown, dark red, poisonous yellow, gray and green contours create the impression of a terrible mixture that kills all light and takes life.

In the picture, the perspective is perfectly worked out – it is emphasized by the size of the figures – in the foreground they are large, at the top – small. Movement transmitted by the direction of the fall.

The work is kept in the Royal Museum of Fine Arts, Brussels.