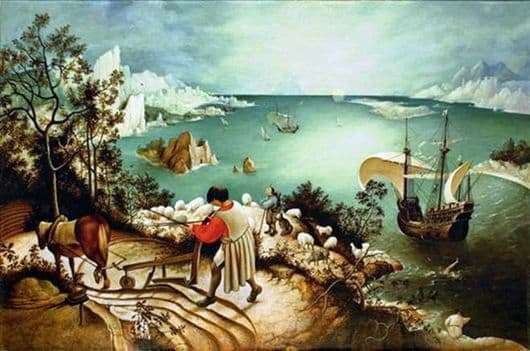 The mythological background of the picture is known to almost everyone. The author is very specific portrayed the finale of this story.

In the foreground, you can observe characters who do not quite belong to the main idea of the picture. However, this plowman, who is engaged in his work and does not even pay attention to what is happening, symbolizes indifference to the fallen Icarus.

The main face of this myth can be seen in the center of the picture, but here it is worth making an effort to see his legs, comically sticking out of the water surface. The river is covered with feathers from the broken wings of the hapless Icarus.

Icarus father in the picture is not visible. However, it can be assumed that the grieving father flew away from this place, noticing the gaze of the shepherd. Ikar crashed on the water surface unnoticed by ordinary people – no one noticed him. They all continue to do their earthly affairs.

However, there is only one creature in the picture who is not indifferent to the fall of Icarus. A gray partridge sitting on a rocky plumb is closely watching him. A legend is associated with this creature, which says that Daedalus killed his nephew, realizing that he shows far greater capabilities than the master himself. Envy and the threat of oblivion blinded the master and Daedalus killed the youth. But having fallen off rocks, Perdix did not die at all. Gracious Athena felt sorry for the boy, and he turned into a gray partridge. The little bird gloats as he watches the situation: Daedalus’s sin has returned to him. Perdix is avenged.

The whole action of the painting develops against the backdrop of a picturesque landscape, written in the traditions of Dutch painting. The whole picture is nevertheless written in calm, soft tones. The whole background behind the horizon is occupied by the sun. It was the sun that caused the fall of Icarus. But the sun is not a bright spot of the landscape: however, the whole picture appears before the gaze in a haze of dim sunlight.