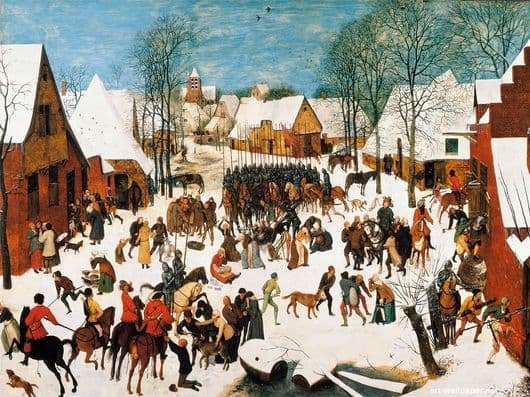 The painter Bruegel is the last in the Dutch Renaissance. In his works on the late medieval type of thinking, he demonstrated the stupidity and weakness of a person.

Peter Bruegel in 1566 created the following works: “The Sermon of John the Baptist”, “Population Census”, “The Beating of Babies”. In these works, for the first time, the topic of the life of the common people in general human social terms was touched.

The paintings fascinate with the awareness of the reliability of the events, and the plot of the Gospel, serves only as a cover. In the work “The Beating of Babies” describes a fragment of a historically significant event from the New Testament – the Bethlehem story related to the birth of Jesus. This event is a manifestation of the bloody despotism of the king Great Herod, who occupies the royal throne illegally. On the artwork “The Beating of Babies” shows the attack of Spanish soldiers on the Dutch settlement. Soldiers who break into buildings take children away from their mothers.

The author of the work most likely witnessed the atrocities of the troops in the supposedly heretical settlements. That is why the soldiers of King Herod in the Spanish military uniform, and Bethlehem is represented by a Flemish village. In the first mention the picture is called “Attack on the village.”

The picture shows how the common folk village family begs for not to kill their child, as the mother loses consciousness from helplessness, and many other burning moments. This work of Bruegel is the first in which the historical socio-moral theme is touched simultaneously. This is due to events taking place in the Netherlands at that time.

The moment of creation of the work coincides with the beginning of the revolutionary struggle of local residents with Spanish Catholicism and feudalism.

From the beginning of the revolution in all the creative works of Bruegel begin to guess the events of that period of time.