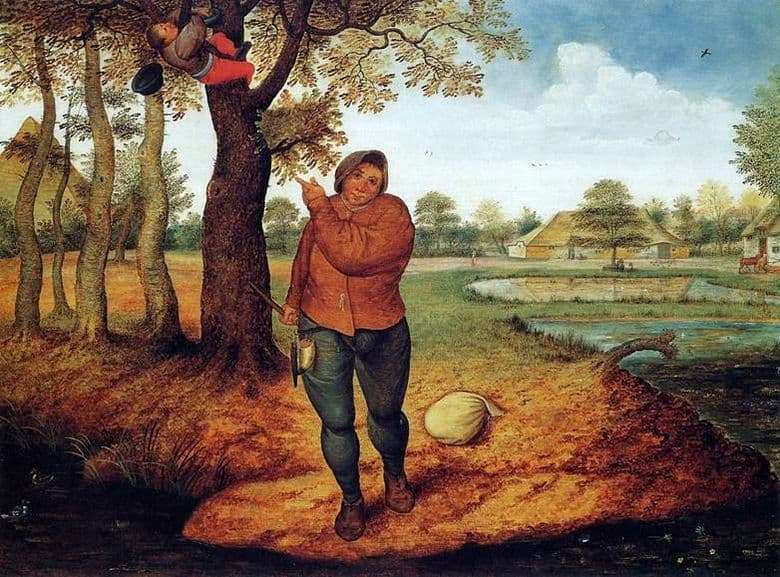 The artist began his career as a schedule. The clarity of the lines and the sharpness of the stroke are preserved and visible in all his paintings. Interest in the ordinary life of rural and urban residents resulted in a series of works, where the main place is given to the nature and life of rural residents. The master is interested in the dynamics of movements, and the faces are either not drawn or turned away from the viewer.

Bruegel emphasized the balance of nature and man, the achievement of which is possible only with a decent life. Remarkably constructed compositions create a volumetric world with its own sorrows and joys.

The artist in his works mercilessly exposed the low character traits of man. In the pictures often hidden double meaning. Not always what seems to coincide with what it really is. At first glance, the plot is quite understandable and ordinary: the peasant goes his own way, and behind him the boy is ruining the bird’s nest. But if you look closer, the peasant is not so simple.

He points his finger at the mischievous, but does not stop him. His eyes are looking ahead but they do not see, and maybe they do not want to see. Indeed, one step away from it is water, but the look is empty and a little silly. It seems that the pupils are tightened with the thinnest film, which allows you to see other sins and ignore your own. The face of the boy is only indicated; here the main role is played by the act itself. And the features of the peasant’s face are spelled out quite clearly, but for some reason they see the artist’s mockery at the dull fellow who does not want to stop the mischievous.