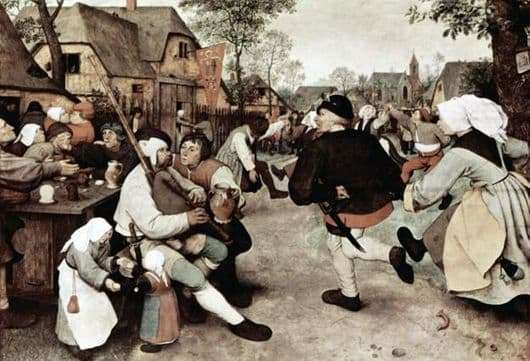 The whole of the XVI, and then the XVIIth state of the Netherlands shook revolutions and peasant uprisings. In this difficult time, one of the masterpieces of northern art appears – Peter Bruegel’s painting “The Peasant Dance”. The painting was painted in 1568, currently in Vienna. The canvas depicts merry peasants who celebrate, apparently, the wedding of one of the residents, or the celebration of the fair.

All the figures are written on a very large scale, and even those in the background are clearly visible. People have fun, dance and drink. The artist depicts a kissing scene, which secretly exchanged lovers, trying not to get into the center of the crowd. It seems that time has stopped for a second in order to give the artist’s brush to capture the movements of the bodies, facial expressions, and gestures exchanged by the dancers. Even the children and they came out to have fun, they hold hands and dance. A feature of the picture is that there are absolutely no similar subjects on it. Couples are dancing, each in their own way, people at the table are talking about something lively, all the new residents come out of their houses and start dancing.

With the help of these gruff and stooping peasants, Bruegel showed the mighty power that the people are, for one of them needs to straighten his shoulders, as shown in the dance, and all the seeming power of the rich will fall into oblivion. That is why the peasants are shown so large and large-scale, as in this picture. It is important for the artist to show that these are not some small people, but strong, beautiful people who can not only work, but also relax. Peasants are not just labor, but real elements, ready to show themselves at any moment. “Peasant Dance”, picture,