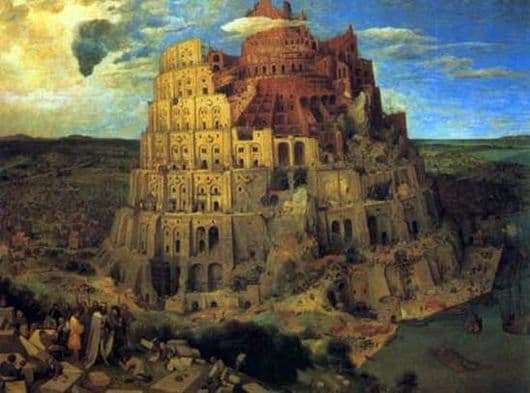 Bruegel P. Elder Tower of Babel. The painting was written in 1563, it is stored in Vienna, in the Museum of Art History. Researchers managed to find out that the canonical text of the Bible combined 2 legends about Ancient Babylon into one story: a story about building a city and mixing different languages, and a story about building a tower and scattering people.

These traditions belonged to the beginning of the whole history of mankind. According to the Bible, the root cause of the linguistic and territorial disunity of people is hidden in the intervention of God. People were engaged in the manufacture of bricks, burned them and said: “Let’s build for ourselves a city with a tower high up to the sky.” But God decided to pacify their pride and mixed all the languages, and they no longer understand each other, he smashed them into different parts of the world, and therefore it was not possible to finish the tower. Nimrod is the legendary conqueror of Babylon in the II century BC, a tower was built under his leadership. It can be depicted as a road that spirals upward, or as a sequence of tiers – each of which is already previous.

Nimrod is sometimes portrayed as a leader by workers dragging bricks. The artist expresses the idea of many languages by depicting representatives of different races. The source for the construction of the Tower of Babel was the “ziggurat”, which was an extensive sacred stone structure, which is a characteristic feature of all the major Sumerian cities of Mesopotamia. His staircase led from the ground to the temple located at the top, where God and the priestess entered into a sacred marriage. The confusion of tongues, or Babylon (in Heb. Blending), should have reflected the impression that was made on the tribes living in the desert, cities like Babylon and its intermingling of nations and customs. Depicting the Tower of Babel was quite fashionable in northern medieval art.