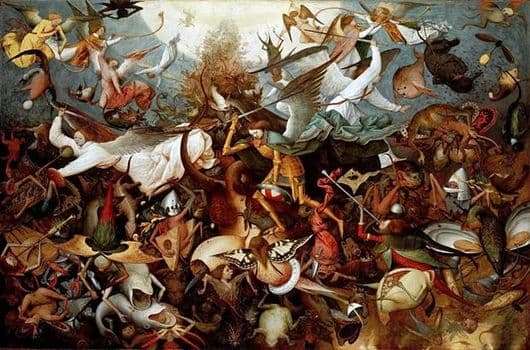 Bruegel created this canvas under the influence of another artist Bosch. In fact, a little parodied it. As you know, Bosch frightened everything – his faces were ugly, the monsters were scary, everything was somehow creepy.

Bruegel created exactly the same creepy representation on the canvas. Only here is an old story, more precisely the legend of the fall of angels from paradise. The fall of the whites and nobles in the very horror, into the thick of it.

From above we see a bright circle – this is apparently paradise, and shadows are flying from there. And we see how winged angels trumpet the trumpets and fight against ungodliness. And it is here that the artist tried his best – whoever is not here. And a primitive devil with hooves you can hardly find monsters in this mess. But here are toads, fishes and other mixed with something else in bulk. And all this comes on the angels.

All this overcomes them

and captures. From the ripped belly monsters crawl out, fly out, come out new monsters. This is a non-stop process. The war is such that the wings of the angels are no longer white, but almost bloody – pale pink, dark red. Some of the angels have already died and turned into a monster, someone has to become one, but the battle is on.

Why did Bruegel have to create such a canvas? Surely, this is an order from a clergyman. And most likely, this was done to intimidate illiterate peasants. Yes, there is anyone afraid to break the ten commandments and go to hell, if there is such a thing. As for the fear of sin, the artist has achieved his goal. What is true is true. But if to judge purely for the work, then he did not disappoint.

Though I tried to work a little not in my own style, I still feel his skill, his presentation. By the way, he doesn’t have many such works, but sometimes he turns to the topic of death. True, in a different form – drawing a still life with a skull, as a reminder of the short life of a person.