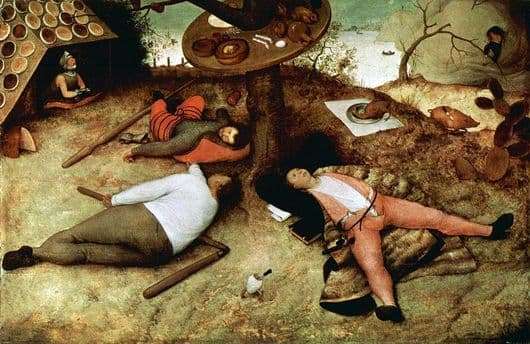 Bruegel was a master of satire. In his works more than once it was possible to meet a hidden chuckle in relation to the Dutch society. So, Bruegel’s picture “The Country of Lazy People” also concentrates in itself a satirical mood. The artist makes fun of a vicious society, outraged by the fact that it does nothing to improve its existence.

In the left corner of the picture, the author left his signature, dating the work in 1567 year. In fact, it is very rarely possible to find out the exact year of writing the paintings, since not all artists date their works.

“Country of lazy people” is a fabulous place. This is a country that has become popular thanks to European fairy tales, in which it has been described more than once. This is the place where the rivers of milk flow and the banks are sour.

For the first time that there is a country where no one does anything, but only eats sweets, was written in the poetic tale of Hans Sachs. The author wrote it in 1536, but it was published only 10 years later. Perhaps it was she who became the basis for the artist to paint her famous painting. In general, the fairy tale has quite a few common features with the picture drawn by the artist.

In addition, each of the characters in the picture belongs to a different class of society. With this, Bruegel showed that everyone does nothing the same: a knight, a soldier, a peasant, and even a schoolboy sleep on the floor. In addition, the author makes fun of the fact that they are all lazy people who are used to sitting idle all the time.

However, despite the fact that the picture has many similarities with the fairy tale, it still has some original characteristics. It is therefore erroneous to assume that Bruegel wrote it based only on the description from the fairy tale. On the contrary, he added something of his own here, due to which the picture was even more original and unusual.