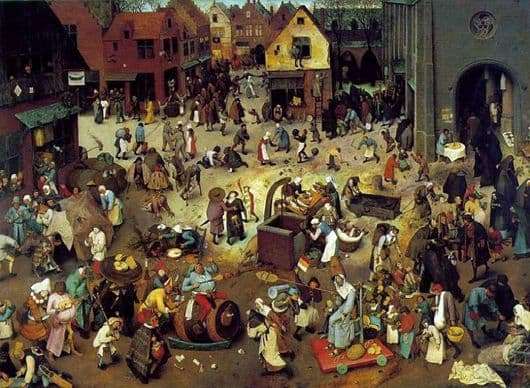 Peter Bruegel in his picture titled “The Battle of the Maslenitsa and the Fast” personifies a kind of theatrical genre, which is called farcical. The picture has the following preface and plot – we see in front of us the confrontation between Fast and Shrovetide, which personify good and evil and all the facets of it.

This picture is the beginning in the new stage of the artist, thanks to which a lot of effort has been invested in this picture. In front of the viewer, the square of one of the Flemish cities is depicted, which is completely dotted with a large number of different figures that look like people at first glance, but this is only at first glance. These figures create real turmoil, they constantly move and create turmoil.

People walk between the houses, stick out the windows, drag something, in general, there is nothing fixed in this picture and if you look at it for a while, you will feel as if the picture is coming to life. The viewer is fully immersed in the atmosphere of the picture and becomes an unwitting observer of all this turmoil. The master presents us with some kind of “cosmic” human creatures.

It is worth noting that during the writing of the picture, many artists tried to liken man to nature and vice versa. The artist shows his audience, human society, as a kind of an anthill, while anyone can see in this and some beauty. This is due to a very thin pictorial solution, which almost instantly catches the eye. The heroes of the picture are depicted so insignificant, but at the same time vital, so much so that sometimes you can’t even distinguish a person’s face or a jester’s mask.

Together with the extravaganza of joy and happiness, the picture is full of bitterness and even somewhat ironic. Every millimeter of the canvas is traced with special care, sometimes even the smallest details of clothing or facial expressions can be considered.