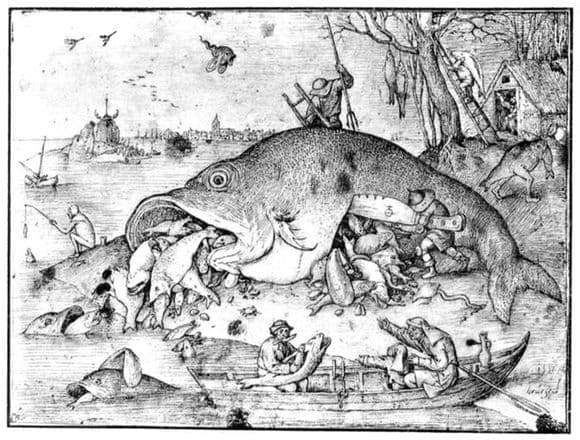 The Dutch master of graphics and drawing, Peter Bruegel the elder, known under the nickname “The Peasant”, produced one of his first sheets “Big Fish Eating Small” in 1557 from drawings and was signed by the name of Bosch, who had already passed away by that time.

Bosch’s work amazed and impressed Bruegel, and fake authorship was attributed in order to please rich customers. The engraving is interesting in its semantic meaning and conveys the idea that everyone is a predator and a victim at the same time.

Bruegel in his works says that nowhere and no one knows what is happening in reality, and what will happen in the next second. The painter lived in a brutal era of Spanish enslavement and inquisition, but he knew how to laugh and make people laugh. From Bruegel’s sarcastic eyes could not hide anything.

The grotesque manifested itself both in genre painting and in gospel subjects. Without any interest in a particular person, he had no illusions about humanity: pitiful, weak and lazy. To contemporaries, the meaning of Bruegel’s works reached quickly, because the illustrations were taken from proverbs.

The engraving is strikingly modern and illustrates the Dutch folk saying. In the picture, a huge fish is shown with a splayed belly and opened mouth, from where other small fish fall out. They, in turn, keep the fish smaller, and the air above the water flies a medium-sized fish with an open mouth, hoping to grab the prey.

On the hill, you can see a creature similar to a man with a fish body, who is already dragging his own prey in the mouth. So, Bruegel depicts the world of people, where the strong devours the weak, but he can also be in the role of the victim of a larger being.