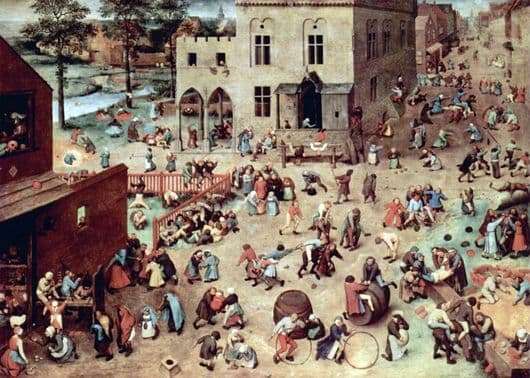 The elements of urban life – the central composition in the work of Peter Bruegel. On the canvas “Children’s Games” depicts a street littered with children who are fooling around and playing. The picture has no limit perspective. The artist has already turned his eyes towards an idle crowd, but this time with the accuracy of the writer tells the viewer about the absurdity of human activity. Thus, the author addresses the problem of the place of man in the world.

A public space is presented to the public, open enough, similar to modern squares, but executed in a medieval manner. On different sides of the street are houses, sometimes not very realistic, but it is not at all embellished. On the side, the bank is green with a river that rushes off into the distance. And everywhere, on every piece of free space crowds of kids were attached, who play from morning till evening.

Based on visual practice, Bruegel

reproduces everything very accurately. Surprisingly, the artist managed to disassemble every detail, group or figure on the canvas. “Children’s Games” is a kind of encyclopedia of children’s games: the film features more than a hundred children’s pranks and fun. Many of them today remain as relevant as they were 500 years ago. The kids walk on stilts, play walks, chase a hoop.

Bruegel was not himself, if in a descriptive manner captured some event. He is worried about another thought: the meaninglessness of human existence. Looking closely, you can see games in which kids deftly imitate adults, depicting a wedding or shop, as if Bruegel himself tells us that all human activity is absurd, whatever he does.

There are no smiles on the faces of the players and it looks strange. Like adults, they surrender to the game with all thoughtful perseverance. The task that the artist has always faced is to convey the world as authentic as possible, such as it was in that era of cruelty and violence.