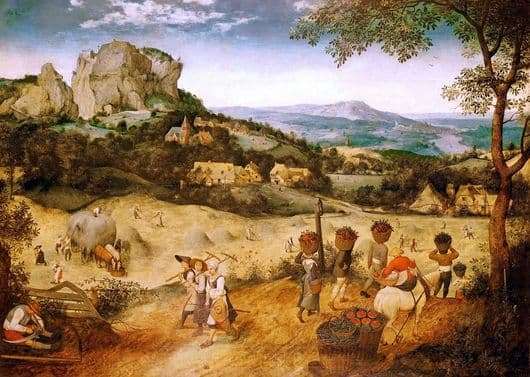 Cloth “Harvest”, written by the Netherlands artist Peter Bruegel in 1565, is in the New York Metropolitan Museum of Art. Art critics refer the picture to the series “The Seasons”, which consists of several canvases, painted by the author in accordance with twelve months. “Harvest” refers to the month of August, when peasants go to a wheat field to gather a rich grain crop.

The author transfers observers to a hot summer day of gathering plants, the reapers work hard with sickles, they still have a lot of work ahead. We see several collected sheaves that are neatly folded against the trees, but the grass does not end there. In front of them lies a whole field of wheat that grows on a hill, from which a picturesque view opens up. Peasants at work can glances at the far expanses, washed by the blue-gray sea waves. The grass has risen to such an extent that even the peasants themselves sometimes do not normally discern it. We can see indistinct silhouettes and parts of bodies huddled at work.

A curious spectacle unfolds in the foreground. A group of peasants opens before our eyes. The hard workers, tired of the tedious work and the scorching sun, sat down to rest under the olive tree. Some rest and dine, others just look intently into the distance, admiring nature from a hill. It is noticeable that everyone suffers from an uncompromising sun-shine, some ingenious ones are stocked with straw hats, and the rest have to expose uncovered heads to hot rays.

The artist painted a picture of light, even pastel, warm hues. We see many smears of sandy, golden brown, greenish, flaxseed, peach, saffron and tangerine color.