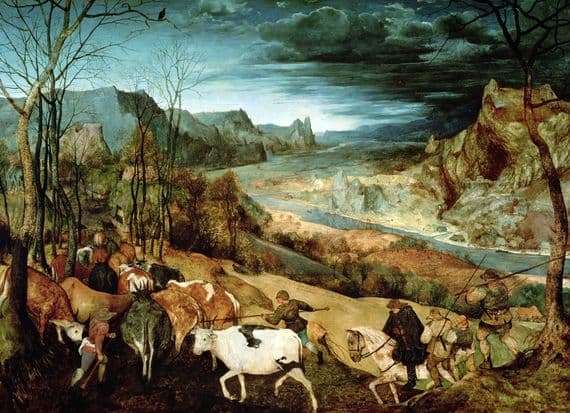 The philosophy of ancient Greece has always argued that our universe is a very complex and, at the same time, beautiful structure, where every living and non-living subject has its own function.

For example, a horse helps to carry and drag, a tank must be plowed, a dog to guard a dwelling and go hunting. As for a man, his mission is to look, and with his eyes he should illuminate the whole world.

Artist Peter Bruegel was fond of Greek philosophy, so he embodied many philosophical ideas in his own works. It seems as if such an abstract and invented cosmos comes to life through the images of nature, plants and animals. For example, his famous “Return of the Herd.”

All the living artist has captured in one color tonality – trees, shepherds and cows. On the one hand, people are responsible for their flock, but on the other hand, they are the same part of nature that must fulfill its own functions.

The Return of the Herd is one of the works of the time of year cycle. Only five works of art have reached the cycle of time. The painting is dedicated to the month of November. The shepherds in the composition reflect all the living, display the movement. All lines and images converge in the drovers, hurrying to get home before dark.

In his past creations, Bruegel also tried to find images that could combine a vital principle, a movement, harmony in the relationship between the universe and man. Therefore, at the heart of his works, he laid the work and work of man. The display of the world in the artist’s painting acquired the features and details of his beloved homeland.

The meaning or function of human existence lies in the work, his work for the good of nature – this is what Bruegel tried to express in his works and works.