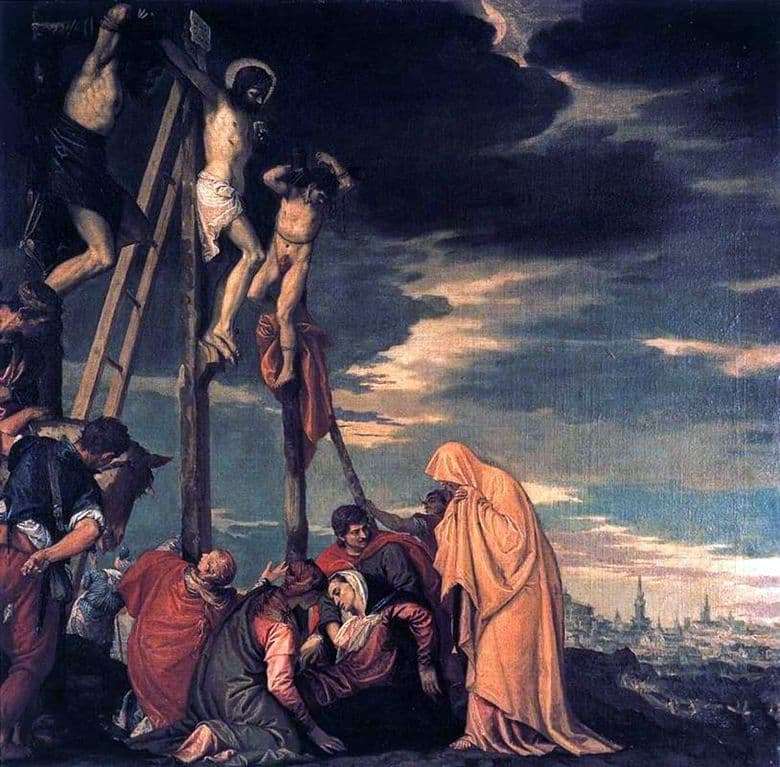 Painting by Italian artist Paolo Veronese was created under the great influence of the Renaissance. Its size is 102×102 cm. Painted on canvas with oil.

The artist tried to convey and create a crucifix on canvas, where the reality of death and the passion-suffering torment of Christ reunited into one whole and do not overwhelm all the greatness of this event. Based on the source of the Gospel, rushing to the likelihood, they more clearly emphasize its universal role and significance.

The first thing that looks in this picture is an unusual composition. The cross with the crucified Christ is usually depicted by artists in the center, but here they were deliberately brought to the left.

The figure of Christ can now be observed in a rather unusual perspective. Namely, in profile. Just this position gives the viewer to see and feel the unnaturalness of the pose of Jesus and the breaks of unbearable pain. All this recreates the visible and striking appearance of suffering and suffering.

Veronese gave a special meaning to the landscape. Over terrifying and dim sky, stormy, condensing clouds persistently creep. They have almost occupied most of the entire upper space, and are ready to burst into a violent thunderstorm that will tell all people about the approaching catastrophe.

To convey even more tragic moods, the artist gave a significant role to human experiences as well. There are already seen gestures, lighting and poses of the characters in the picture. Clear colors of clothes are found in heavy stains and are emphasized against the background of a gloomy sky.

The overall tragic tension is conveyed in the expressive and lively silhouette of Mary Magdalene, petrified in grief. A piercingly bright yellow robe, combined with brown-red tones, sounds like a cry of despair.