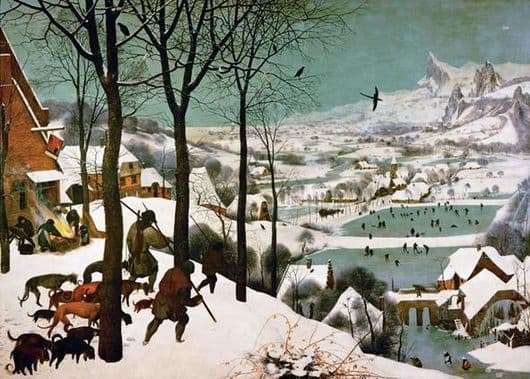 Like many artists of his time, the famous painter Peter Bruegel created a series of paintings called “The Seasons”. The best creation from this cycle and at the same time one of the best works of the artist is the painting “Hunters in the Snow”.

The painting depicts an alpine village on a winter day. The main characters, hunters, return home with their faithful dogs. Men wearily wander through the deep snow. Dark slender trunks of trees soar up in front of them. From a high cliff, we see the distance unfolding: the valley, villages, fields and rivers, strewn with pristine snow, and the backdrop to all this are the majestic snow-capped mountains. At the bottom of the cliff is a picturesque village with elegant houses, and behind it – a lot of people frolic on the frozen ponds.

We see various people who are busy with their daily activities. There are a lot of figures in the picture and you need to spend time to make out each of them. After the hunters, the first thing that strikes the eye is a group of peasants who lit a fire. Also on the canvas you can see a person walking across the bridge, who carries a large bundle of brushwood. Under the cliff, another hunter lurking, aiming at the birds. In the distance, a horse is seen pulling a cart. On the left side of the road behind the church, people are trying to put out a burning house. In the upper right corner we see birds soaring in the air. It seems that this view we are contemplating from the same bird’s-eye view. And this flight takes place under a bottomless sky of a greenish-turquoise hue.

Bruegel was able to miraculously convey on his canvas the movement of all living things. All people, despite the fact that we do not see their faces, seem quite real. It seems that the world created by the artist’s brush actually exists. And we not only see, but seemingly hear it: the crunch of snow under the feet of people, the barking of dogs, merry shouts of skaters, the crackle of a fire.

The artist created on canvas an unprecedented sense of space. For this, Bruegel plays with the contrast of near and far plans. A kind of clamp between the two plans are the central figures of the picture – hunters. All this contributes to the disclosure of the main motive of the picture – the unity of man with nature.