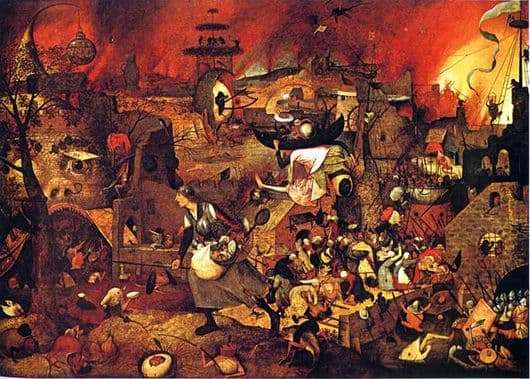 One of the most terrible pictures of Bruegel. The horror of this picture can be somewhat explained by the incomprehensibility of this canvas and all the events taking place on it. If we consider the picture “Mad Greta” from the side of emotional perception, then in its expressiveness it surpasses even Bosch’s phantasmagoric images and ideas.

A closer look reveals the blood-red sky, which is covered with an ominous haze, while the whole picture is simply littered with various vile and sinister creatures. We see enormous size ugly heads with big eyes that give rise to these terrible creatures.

At the same time, people who are around do not seem to notice anything happening, but die because of the crush that they themselves have created, due to the fact that they are blind from their greed and are trying their best to gather as much gold as possible. People do not notice that in fact it is not gold, but the impurities that the ugly giant is spewing.

The picture is striking and causes a feeling of disgust neither by ugly creatures, but by the fact that people are mad with their baseness, stupidity and vices.

It is thanks to them that the atmosphere of the absolute hell is created, and not by the devil and the monsters. Not terrible monsters, not the devil himself is striking in this picture, but people who are mad and mired in vices. In the center of the canvas is a huge woman who is dressed in some sort of rags. In her hand is a sword, and a dagger is hidden behind the belt, apparently she is taking away someone’s things. Not far from her ordinary people robbing someone’s house.

In this case, the very name of the picture has symbolism. At that time, Greater Greater was called the big gun, and most likely the artist tried to show all the terrible motives of war that span the world. In confirmation of this, the dilapidated walls of the fortress, fires and large troops have deadly spears in their arsenal.