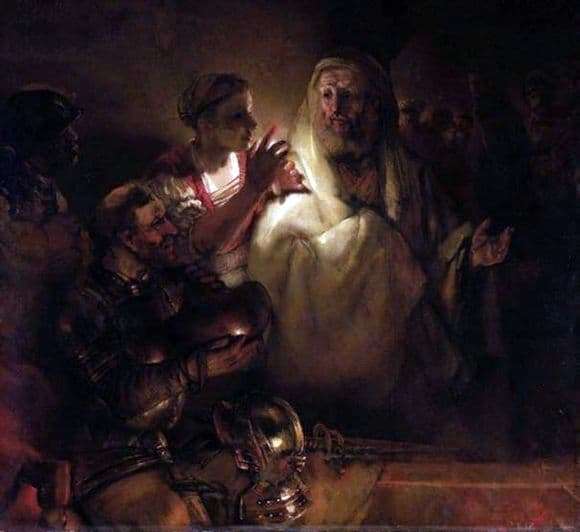 A gloomy picture in brown tones, weakly sanctified by the flame of a candle, is demonstrated by one of the famous religious scenes. “Peter’s denial” is listed in the Gospels of the Four Apostles. The New Testament episode is always described in the same way.

At the last evening, from the mouth of Jesus, there is a prediction about the imminent betrayal of all his disciples. Peter will repudiate his beloved teacher three times. The faithful apostle did not believe in what was said by Christ, but what was said was destined to come true. And, captured at night by the soldiers, Peter denies acquaintance with Jesus, so as not to be caught by them.

Rembrandt brilliantly embodied the episode of the Passion of Christ on canvas. The image depicted in the picture is divided into two planes. Behind, the outlines of the Savior, looking towards the viewer and Peter, are guessed. He turned his back to us, where his hands are tied. Next – he was arrested by the military.

The foreground tells about the moment of betrayal of the student. His look is frightened. By the position of his body, he shows a desire to withdraw from an unexpected round-up. An unceremonious maid, feeling confident under the protection of two soldiers who were behind her, boldly leans his left hand on the suspect’s shoulder, the other hand lighting his face with a candle.

The spiritualized face of a caught believer is beautiful and full of dignity: a straight nose, intelligent eyes, a noble gray beard. His light robes hint at belonging to good forces.

Peter subsequently repent of a perfect abdication and deserve forgiveness. Soldiers are more immersed in darkness. One of them sits, folding his armor, and gazing at the man he met with suspicion.

The painting was painted in 1660 in the traditions of the dominant Baroque. Masterfully comparing light and shadow, Rembrandt conveyed to the audience a holistic, multi-figured biblical story.