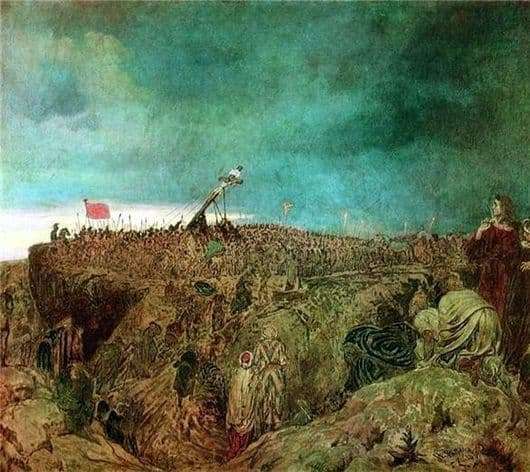 Throughout his life Repin repeatedly turned to religious topics. “Golgotha” is a picture, literally suffered by the artist, whose design he had been bearing for many years.

Reading the book of Repin’s memoirs, one can understand how much the author was experiencing this plot, letting it through his heart. He felt, heard the weeping and the moans of the mourners for Christ.

Under the gloomy heavy sky – a countless crowd of empathizing and curious. Interestingly, Repin depicted Christ on the cross in an ordinary Russian shirt. Arguments about why the author has applied such a technique are still ongoing, but one version is supported by most art historians.

Critics believe that the artist through the elements of clothing conveyed the drama characteristic of the Russian people. Since the plots of biblical subjects were clearer and closer to ordinary people, the language of art also became more eloquent.

An interesting fact is that Repin did not strongly complain about the church, treated her rather coldly. In a sign of solidarity, when Leo Tolstoy was excommunicated from her, the artist also stopped visiting God’s house. Why are there so many incredible religious scenes in the works of Repin? The fact is that, despite his personal attitude, he presents the church to people as a sign for the Russian people.

“Golgotha” was presented at an art exhibition in Helsinki, where it became an honorary leader among other works. This picture was significantly different from the usual Repin composition.

In addition, “Golgotha” was filled with symbols, little things, such as a fresh dug grave, bloody footprints, scurrying dogs. This was uncharacteristic of the author’s work and, together with admiration, the picture caused sincere amazement of connoisseurs.

The exhibition in Helsinki was the last during the life of the author, and “Golgotha” – one of the brightest pictures of the final creative years.