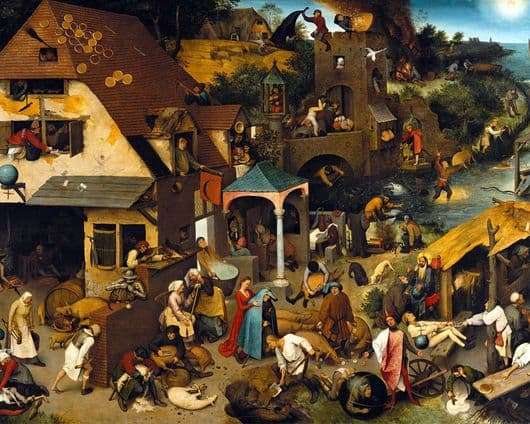 The picture is full of a large number of different scenes and figures. This painting is a parable dedicated to Flemish folklore. The painting depicts Dutch proverbs, including on the canvas more than 100 metaphoric scenes, which ridiculed popular wit. On the canvas depicts the similarity of the village, namely a large house with extensions to it. It contains in itself and near itself a lot of people who are busy with their business. There are a lot of them in such living space. It looks very funny, entertaining, as if beckoning viewers into a world of various misunderstandings and harmless jokes.

All scenes are interesting in their own way and carry their own meaning. I wanted to dwell on some episodes. 1. In the left corner of the picture a woman tied the devil – says that this woman is not afraid of anyone and is ready to curb anyone. 2. A woman carrying water in one hand, and in another fire it is insincerity, it cannot be trusted. 3. In the arch at home, a man sits between two chairs – it means to be in a difficult position, to show indecision. 4. Under the house, a woman spins yarn from someone else’s spindle – finish the work begun by other people. 5. A woman puts a blue cape on her husband – a woman is deceiving her husband, cheating on him. 6. At the bottom of the picture, a man falls asleep to a hole in which the calf drowned – to help or correct mistakes when it is no longer necessary. 7. Boat with a raised sailboat – keep your nose in the wind, be alert. 8. The girl in the window of the tower looks after the departing stork – she is lazy, wasting time. 9. On the steps a man throws money into the water – throwing money down the drain, it is unreasonable to spend your good. 10. A man is heated by the fire, from a burning house – a man. Who does not care about the problems of other people, it is an egoist. This is just one tenth of the scenes on the canvas. This picture can be viewed for hours, deciphering the idioms depicted.