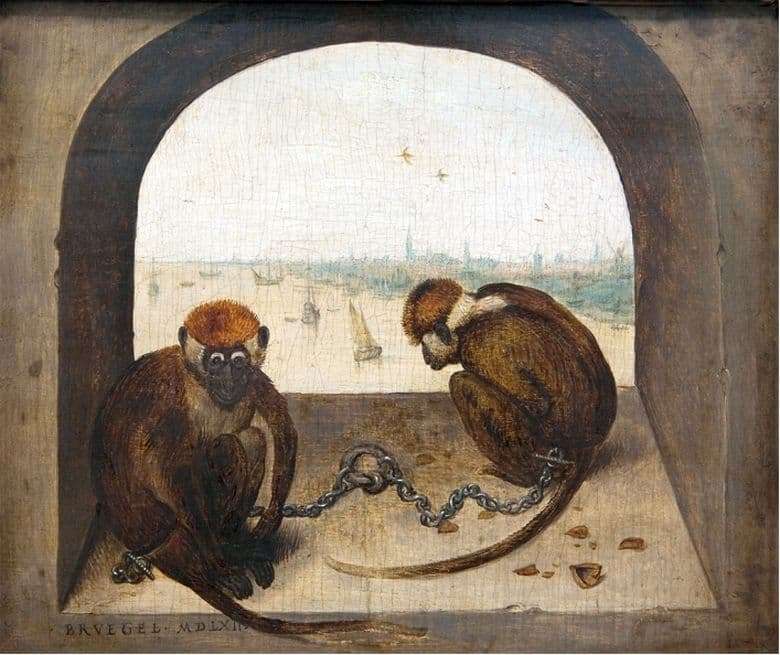 Peter Bruegel the Elder’s painting Two Monkeys (Two Monkeys on a Chain) was painted in oil on a tree in 1562.

The plot is based on two brown monkeys chained to one ring. They sit on a wide low window, which overlooks Antwerp, the bay with ships, towers and houses, lost in the fog. Animals and chain – the most vivid images of the work. They are traced in detail and bright. One animal turned to the viewer, however, its almost human look was directed inside, into the depths of its soul. On lostness and loneliness are indicated by clamped, hunched poses. They turned away from each other. Even being close, they do not stick together, do not support each other.

In the tilting of the head, in outline, posture, and limply lowered tails, there is longing, apathy, despair, and an understanding of the impossibility of finding freedom. Birds hovering over the sea, create a contrast – they, unlike the chained animals, will available. Interestingly, the birds fly in pairs, repeating the image of two animals.

Another contrast is created by a massive window opening and a graceful, transparent image of nature and the city outside the window. The landscape in the background is written in soft, gentle tones. It is characterized by lightness, some melancholy, sadness, in contrast to the gravity, monumentality and immobility of the walls and window sill.

The work is a symbolic image of sin and low instincts. Monkeys appear as the embodiment of vices – recklessness, debauchery and frivolity. The chain holding them is aimed at taming sin and low desires. An empty nutshell – all that remains of the old, filled, but now ruined life.

Perhaps the picture is autobiographical and is connected with the author’s love affair with some maidservant and departure from Antwerp.

The work is kept in the State Museum of Berlin.