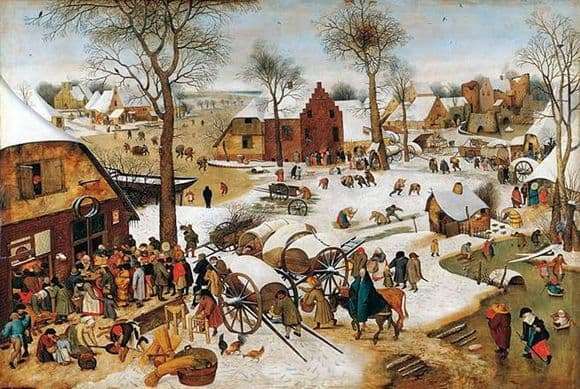 The well-known work, which has biblical content as a basis, was written by Peter Bruegel in the 16th century. The work shows the lifestyle of people of that time, both in everyday and in social terms.

The creative process of Bruegel aims to show the true, true essence of everything that happens in the world. Gospel versions disguise what is happening: after all, they convince us that Bethlehem is the true point of the globe where Jesus Christ was born. The prophets of the Old Testament declare that this is the very city where the messenger of the higher powers came. But Joseph and Mary lived in Nazareth, it comes from a census conducted by the emperor Augustus, from which we can conclude that Mary gave birth to a child in Bethlehem.

In that era, there were a number of specific laws that obliged any visitor to go to the settlement where he came from. Joseph sent his let to the city of David, although it was dangerous and difficult. Since Maria very soon had to give the child a light, there was very little time left and every second was counted.

The author desperately tried to depict the whole essence of lawlessness and disgrace that happened because of the management of representatives of the authorities of this area. It shows the household structure of people, but some detail relates the work to religious – donkey and ox, carrying Mary. These beasts should be featured in the Nativity of Christ.

Perhaps without these details, the work had some other motive.

Joseph is a secondary person, therefore, from the angle and face covered with a headdress, you cannot see his face.

The author wants to draw attention to the presence of Christ here, now, in a crowd of people. He says that Jesus is invisible to us, as long as he is outside of us, not inside.