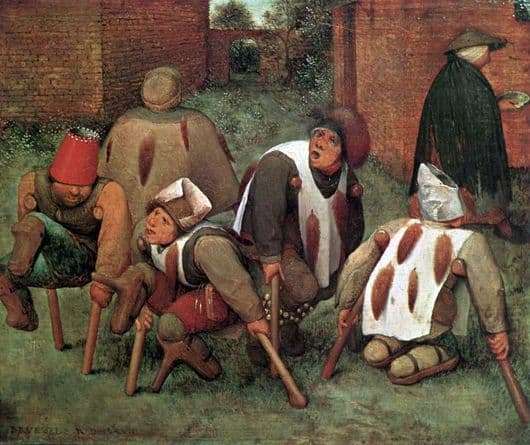 The painting by Pieter Bruegel, which is called “Cripples”, has quite realistic motives for the remnants of life, at all times, and even in the modern world too, it is not rare to find such a composition live.

Here, unfortunately, the question is different; what was the artist trying to achieve? When writing this picture, what did he strive for, what goal he set, let’s try to figure it out together? Immediately, what appears before our eyes is a rather depressing, straightforwardly screaming composition consisting of several cripples who do not have these or other limbs.

We prefer, at least, not to encounter this rather ugly world of missing and severed limbs. Most likely, one of the tasks of the artist was to push the viewer directly face-to-face, and these cripples without the possibility of embarrassingly removing their gaze from them. The color composition is also quite interesting, these cripples, who were once full-fledged people, who see their whole life in predominantly gray tones, sit on grass that is quite rich in green. In their eyes is clearly visible the pain that they receive in just “thanks” to us.

Pain and most likely hopelessness. They are surrounded by rather aggressive, red, brick walls, which add to this picture even more tragedy, which is already happening everywhere, but we are used to not noticing the problem of thinking that it does not exist.

It becomes clear that Bruegel, when he painted this picture, did not even think of creating allegorical motives for the wrong creation of this world, and specifically, the helplessness of people who got into trouble and were forced to relive this tragedy again and again.

Very bright and colorful, the theme in this picture is revealed, which will allow any viewer who decides to join the art to reflect on it.