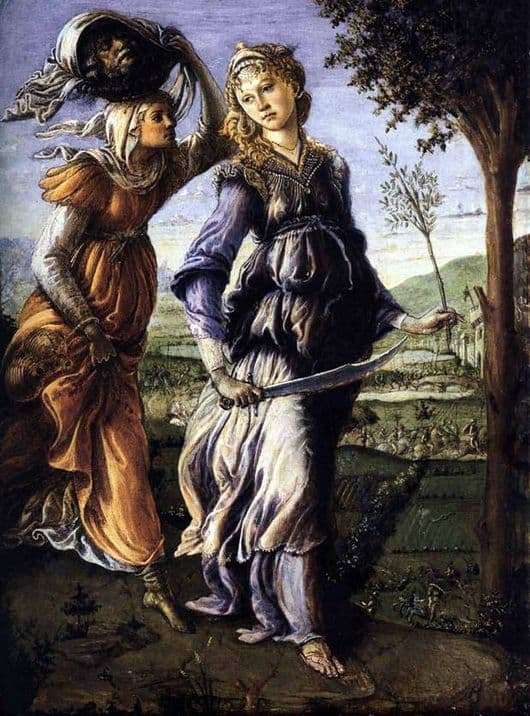 The great Italian artist of the Renaissance – Sandro Botticelli is the author of many of the greatest works that became the heritage of world culture, among which can be noted the canvas entitled “The Return of Judith” written between 1472 and 1473.

Judith is a biblical character, a widowed girl who, according to legend, saved the inhabitants of the city of Vetulia from being enslaved by the troops of the Assyrian king Holofernes. The legend tells that the Assyrian king was extremely cruel and lustful, hundreds of beautiful women visited his harem, and thousands more were threatened with the same fate, he thought to destroy the defenders of the besieged city and take it by force. But among the women living in Vetulia was a brave young widow named Judith, ready to sacrifice her honor and life for the common good.

Judith demands from the elders to refuse to the tsar of voluntary surrender, and she herself changes into a woman of easy virtue – a courtesan and sent to the enemy camp. A beautiful Jewess immediately attracts the gaze of the king, who demands her to her. At night, when the king fell asleep, Judith took a sharp sword and cut off his head, then walked freely past the sleeping warriors and returned to her city.

It is the scene of Judith’s return that the artist draws a brush, the picture depicts Judith herself, as well as her maid. The girl holds a huge sword in her hand, her face is thoughtful and even sad, her legs are barefoot, but she is striving to go home with a decisive step. The maid barely keeps up with the quick pace of the young widow, with her hand holding the basket in which the king’s head rests. In the background, pictures of houses and buildings can be seen, yet the rest of the space is occupied by a clear morning sky.