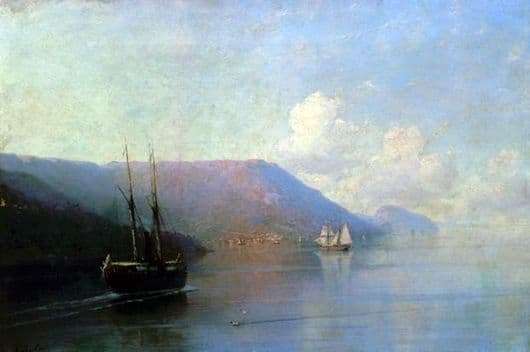 Well, what can I say when this canvas belongs to the brush of the great Aivazovsky?! Only a genius could achieve such beauty on canvas. He managed everything. He could depict water in such a way that it seemed that it was water on the canvas, and not a set of paints that gave such an effect.

He naturally did not reveal his secret, leaving us just to admire his genius. And it’s good that he lived a long enough life and worked until the last days. And it’s good that thanks to this we have the opportunity to see a huge number of seascapes and battle scenes at sea and sea disasters.

And now on the canvas of the Crimean coast. He is now hidden in a hazy mist. This is most likely either early morning, or the case was already setting for sunset. But such a merger or almost merger of the sky with the sea happens at these very hours. See how beautiful it is. The only thing that distinguishes them is the presence of ripples in the water. And so, if it was a mirror-like purity of the sea cloth, we would hardly have distinguished where the heavenly and the sea kingdom are.

The master deliberately hid the shore behind a misty haze, he did not clearly designate them. Just the main thing in this canvas is the sea. And we see ships that ply the bay near the coast. And we see other “ships” floating in the sky – clouds on the horizon. These are the true forerunners of the storm or storm. And here you begin to understand why ships are trying to swim in the bay. So you can escape from the fierce waves and get a safe shelter.

Aivazovsky has long been recognized as a genius of seascapes. Collectors hunt for his canvases and try to buy them, no matter how much they cost and whatever size the work of the master would be. But almost all of his paintings are stored in museums in Russia. There are some works that occupy prominent places in world museums, but there are not so many of them, such as, for example, in Evpatoria, in the house-museum of the artist.