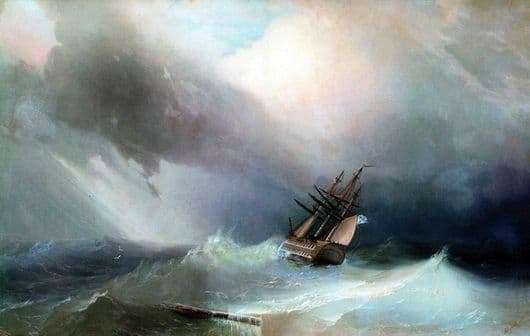 Throughout his life, Ivan Konstantinovich Aivazovsky was passionately in love with the sea, painted pictures on the marine theme, became world famous for centuries and remained as an artist, talentedly and uniquely painted seascapes. It seems that the artist was aware of some great secret, which allowed him to penetrate the innermost depths, to know the very essence of the living and quivering essence of the sea element.

The well-known, recognizable canvas by Aivazovsky “The Storm on the Sea at Night” does not leave anyone indifferent who will be lucky to get close to him. The living, exciting, passionate and life-affirming power of the raging elements creates the illusion of the spectator’s involvement in the plot of the picture. An amazing combination of shades of color and light, the ultimate concentration of energy and expression creates an amazing symbiosis of painting and music, which is rarely possible even for brilliant artists.

Aivazovsky’s picture lives, breathes, sounds, filling the space surrounding it with splendor and horror. When you look at a moving sea wave, you can hear the distant, muffled, but obvious roar of it, like the voice of a wild beast.

Through painting, Aivazovsky creates an anthem to the magnificence of natural phenomena, in front of an onslaught, the strength and inevitability of which man is a small, miserable vessel, tilted and ready to go to the bottom of the sea at any moment. But so great is man, despite the insuperable trials that come out of them with honor. The sinking ship remains undefeated in the picture.

This dramatic struggle of man and nature is observed from the height of the heavens by the full moon, which appeared among the clouds torn by the storm, like a street lamp. Moonlight adds color and drama to the picture as a whole, fills the palette of a dark night storm with an unusual glow.