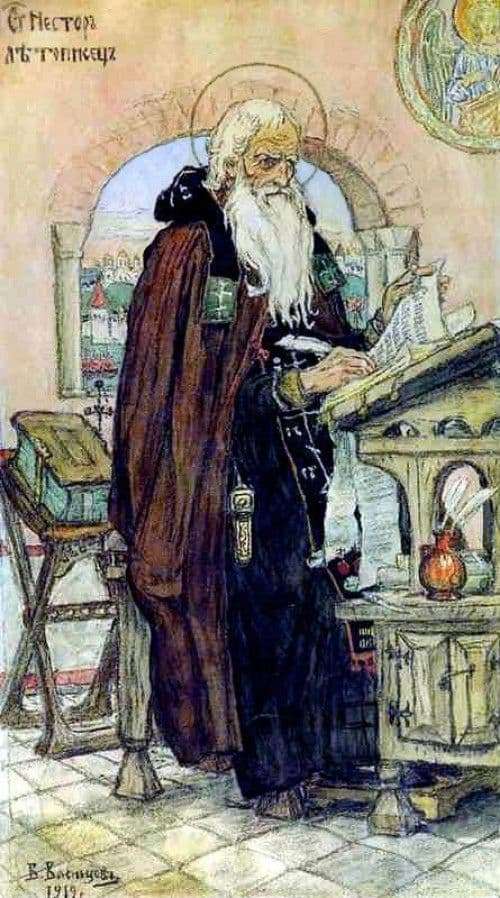 The picture is imbued with respect and appreciation for this great man, not just a man, but a famous historian of antiquity, because thanks to his works, we are familiar with The Tale of Bygone Years, as well as with the campaigns of Prince Igor. No wonder the artist depicted a historian with a halo on his head, because he believes that the place of this man is among the saints and wise people.

The picture is saturated with colors, the transitions give reality and clarity, as if the picture had just been painted and the paint is still drying. It depicts an old man, but his face is completely non-senile, it is covered with marks of experience and wisdom, it is both strict and kind.

The whole image of a historian seems to teach us an understanding of life and an understanding of what surrounds us and gives us knowledge. The moment is captured when the historian presents his thoughts and historical facts on paper, his hands are strong and wiry, the pen in his hands is also not battered, it looks like they didn’t work at all, but the previously recorded entries are visible in the book.

The historian’s gaze is fixed on the book and his brows are frowned a little over his eyes, so his look becomes even more severe and noble. only gray hair and a bald spot indicate that we are a man of old age, the rest suggests otherwise that the person depicted is not yet ready to leave this mortal world.

Apparently the artist tried to portray the historian in the process of writing one of his works, because both the landscape behind his back, and the lighting, and the objects in his hands tell us that an important historical process is actually taking place.

The deep wrinkles on the forehead and under the nose are so clearly visible that one gets the impression that the author of the picture was personally acquainted with the historian or painted his portrait. The whole picture is imbued with the spirit of desire for knowledge and creativity, as well as to convey to the descendants of truths.