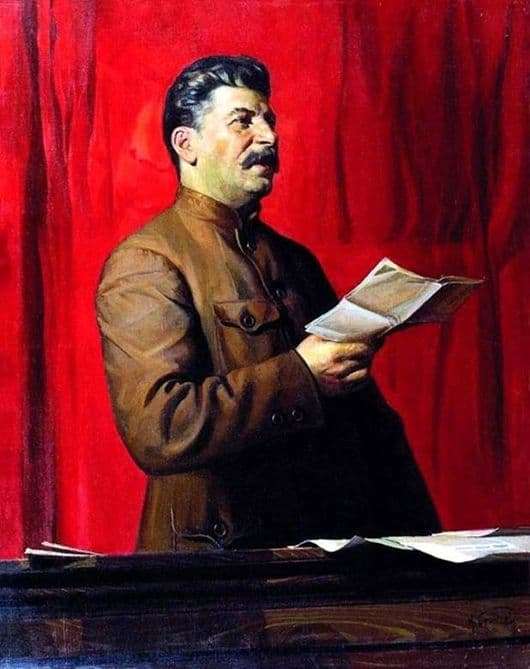 Brodsky was not just a brilliant portrait painter, public figure, but also was a special account of the political elite. It is known that the portraits of the leaders trusted to write only the most proven and responsible artists. That was Brodsky.

For the first time to write the faces of politicians, the artist began with Lenin after Lunacharsky made a note in the mandate of the author’s ethical and political reliability. So was born the famous Leniniana – a selection of paintings, sculptures, busts of the leader.

Brodsky is an ardent revolutionary.

Being a favorite student of Repin, he was able to graduate from a higher art school only thanks to his teacher, as he was excluded from the school as a politically unreliable student. The artist draws the leaders with inspiration, with passion and dedication. Over several years of work, the author has created several dozen canvases depicting Stalin.

Known for his portrait on a red background – “Portrait of Stalin.” A bloody canvas, a French jacket, buttoned all the buttons – a strictly military look at the hall from the podium, the speech of the leader… All this vividly symbolizes the era of Stalinism and the triumph of communism. The picture conveys the temperament of Stalin, and also expresses the author’s respect for his model.

In all his paintings, Brodsky adheres to warm shades. This is one of the few that “burns” rather than warms, which further emphasizes the solemnity of the moment captured. But despite this, in the portrait work of Brodsky, Stalin is always calm, often to the point of coldness.

Brodsky was a very extraordinary person, had a “bourgeois” passion – collecting paintings, which he was officially allowed to collect the current government as a sign of respect for the great skill of the artist.