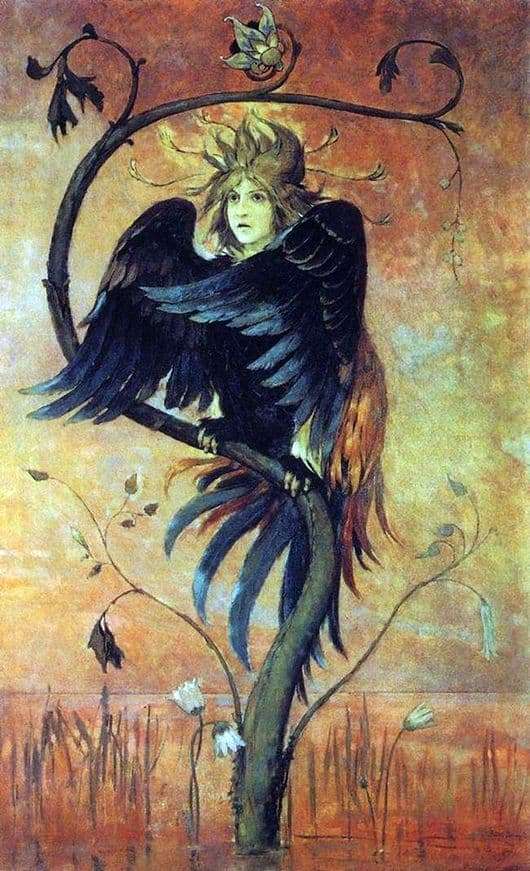 The artist specialized in mythological and historical subjects. Often painted in folk and romantic styles of painting. He believed that the true work conveys the past, the present, and perhaps even the future.

Vasnetsov borrowed the plot of the picture from Russian folk legends, ballads and fairy tales. This choice was influenced by his childhood. There lived an artist in the countryside with hilly groves and dense forest, with winding and wide valleys. From the earliest years, Vasnetsov heard folk legends and epic tales.

In 1897, Vasnetsov painted the painting “Gamaun, a Bird of Prophecy”. According to mythology, this bird is the messenger of the gods. At dawn, it flies to the people. And with it appear the gale and a violent hurricane. She sings sacred hymns and foreshadows the future to those who can hear her secrets. And to hear her voice amid the roar of the wind, the rustling of leaves and the sounds of an approaching thunderstorm is not so simple. Gamayun acts as an intermediary between gods and people, because the winged messenger delivers important information to ordinary people.

The bird is depicted with a gloomy-beautiful face of a girl who looks away into the distance. Something mysterious and mystical is felt in her eyes. The bird has already overcome the difficult and thorny path of knowledge of the surrounding world. This unusual look attracts attention. Gamayun also sits on a winding branch. The main advantage is the colorful effect of the picture. The artist used juicy, but at the same time calm colors. Black wings stand out against the bright background, which symbolize rebirth. It seems that it will open them now and will fly upwards.

Looking at the picture, there is a feeling of insane anxiety. Vasnetsov was able to revive the spiritual heritage of man. His painting had a great influence on the development of modernism and symbolism in Russian painting and poetry.