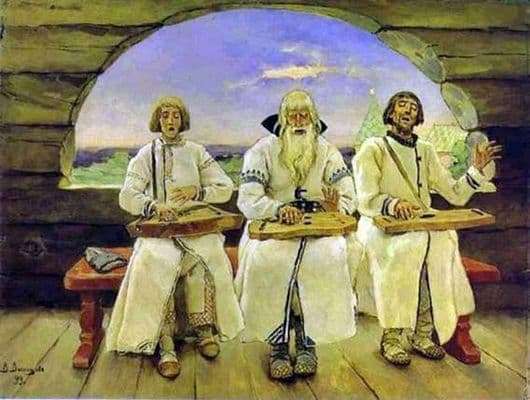 Vasnetsov Viktor Mikhailovich – an outstanding Russian painter, who became the founder of the national-romantic version of Russian Art Nouveau. Throughout his life, he sought, through his creations, to convey and show the beauty of his Homeland and the people who lived there: simple workers and peasants.

The painting “Guslary Viktor Vasnetsov wrote in 1899. He made it in oil, taken as a canvas basis. At the moment, the work is in the Perm State Art Gallery.

Vasnetsov was always distinguished by his penetration, all his life he sought to show the beauty and originality of Russian culture and the lives of ordinary Russian people. The artist wanted to embody the Russian spirit in his paintings, often refusing the generally accepted rules and canons of writing pictures.

The picture “Guslary” makes you go back many centuries in order to feel what the author wanted to convey. The canvas depicts a large wooden hut, with thick beams and a wooden floor. In the center of the canvas one can see the arch of the window, in front of which three singers are seated on a broad bench. Judging by their long white robe, the singers are monks. Each of them has a harp on their knees.

The eyes of the monks are lowered onto the instrument and they, thoughtfully turning over the strings, sing in harmony. On the left is a very young guy, in the center is a gray-haired old man, and on the right is a middle-aged man who threw back his hand and sings enthusiastically. The old man slowly picks strings. Their song is sad, about the expanses of the lands of the Russians, about the fields and meadows of the Motherland, about people. Workers from dawn to dusk, about the working people of Russian.

Viktor Mikhailovich Vasnetsov managed the impossible – to make the viewer feel what was going on in the picture, to feel the Russian spirit and for a second to be where the songs of the guslaries flow from.