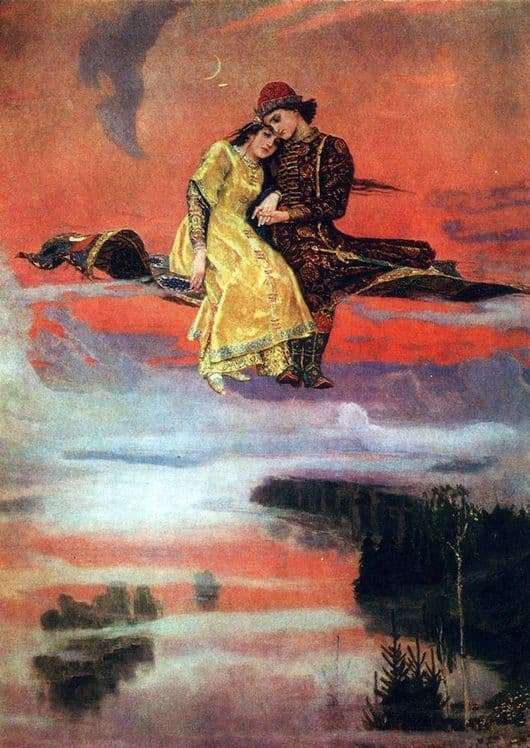 A remarkable story of the circumstances that led to the birth of the painting Carpet-Plane. ” The young Russian artist Viktor Vasnetsov was offered a very interesting order from a major philanthropist and industrialist Mamontov Savva Ivanovich. It was proposed to draw a picture that embodies a fantastic flight, the fabulous movement.

It was planned to decorate the office of the chairman of the Donetsk railway. But members of the board found the canvases created by Vasnetsov out of place in the business setting of the office space. Thus, Mammoth became the happy owner of the paintings that adorn his personal collection.

Folk art was chosen as a means of moving through the air by a carpet flying across the sky, where the fairytale hero returns with a victory. Ivan Tsarevich fulfilled the task with honor, found in the far kingdom, the thirtieth state, the magic Firebird in a golden cage, the light from which illuminates the pale sky. In the traditional for Russian folk tales elegant and solemn royal attire, stands in full growth a young prince on a flying carpet across the sky. His whole appearance speaks of the confidence, courage and integrity of the hero.

The illusion of movement is created by the edges of the cloth spread across the diagonal, which clearly resemble the wings of a huge bird, next to which real frightened birds look rather small and pathetic. A landscape extending under a carpet wing is seen in perspective, reinforced by a hazy mist.

The smoothness of the river flowing down the river, stretching into the distance, underlines the reality of the sensation of movement of the aircraft. And confidence in the materiality, weight of the carpet-plane is created by its bends. Realizing the people’s everlasting dream of conquering the air spaces, the picture is filled with optimism and faith in a beautiful future.