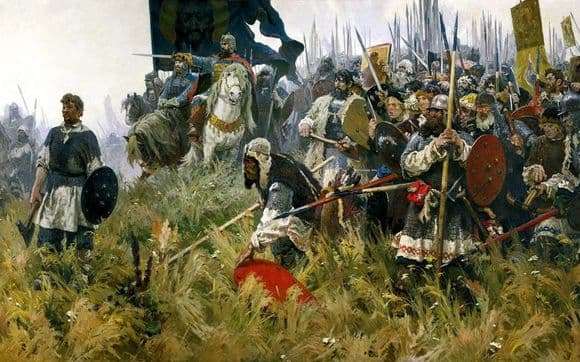 Before us is one of the most impressive creations. The painter decided to turn to the theme of the struggle of the people with the Tatar-Mogul. First, he made sketches that are able to tell us about the difficult path of searching that the painter went through. He could not understand how best to express the idea that the Russian people cannot be defeated.

We do not see a wide panorama of the whole battle. Bubnov only captured the moment when the warriors are waiting for her to begin. Everyone is overwhelmed by impatience. Everyone believes in an indispensable victory.

We see Russian soldiers standing in a wide field. It seems that they are completely immobile. But actually this is not true. The movement is gradually growing. It is incredibly tangible and at the same time restrained.

We see one lifting the shield. Another warrior frantically squeezed the ax. The third already rapidly pulled the bow of his bow. Another moment and the battle begins. Everyone looks at where the enemy is. Dmitri Don’s gesture reinforces this. His sword is directed towards the hordes of Tatars.

Bubnov managed to capture the calm, after which the storm broke out.

We can easily guess the background of the event, which is sealed. Further action is also understandable.

The artist of composition emphasizes the solidity and solidarity of the Russian army. It seems that soldiers grow right out of the ground. They can not be moved or pressed. But this does not mean static, since movement is felt in everything.

The army has no end, it continues somewhere outside the canvas. All warriors stand tight to each other. It creates the feeling that an avalanche is subtly moving.

The whole composition is expressive and collected. The main character of the film is the people of Russia. The artist was able to see living people in the warriors of the past. This sensation he masterfully conveys to all viewers.

The whole picture is permeated with optimism. The artist was able to create an image of the people who win.