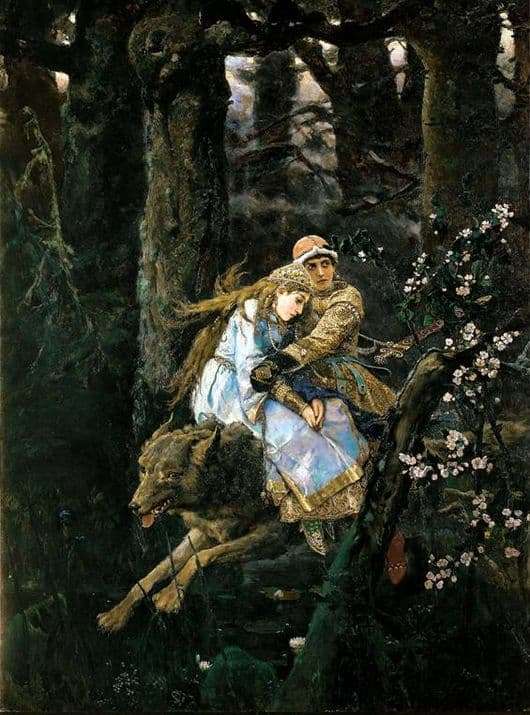 This work of art was written by Vasnetsov in 1889 in Ukraine. Currently, the picture is posted in the Tretyakov Gallery. Ivan Tsarevich and his companion flee on a gray wolf.

The plot of the picture emphasizes the theme of fairy tales and fantasies of Russian folk art. These are mysterious trees, a dense forest, a gray wolf that carries fairy-tale heroes on its back. Thus, Vasnetsov is trying to get away from the real and the present, immersing the viewer in a distant and unknown fairy-tale past.

In the center of the picture are three crystals of a fairy tale. Ivan Tsarevich, dressed in a luxurious royal dress with a worried and sullen look, staring into the depths of the forest.

Elena Prekrasnaya in the arms of Ivan Tsarevich. She was frightened and at the same time submissive, laid her head on his chest and completely trusted Ivan. And, finally, Ivan’s huge and strong gray friend is a wolf that takes his riders away from the inevitable chase. His whole body is tense, his paws are stretched, his ears are pressed, which underlines the entire movement of the wolf, striving somewhere forward. He was already tired of the long jump and barely kept on his feet, saving his friends. The main characters are surrounded by a dense forest, which its branches trying to cling, and prevent travelers from hiding from the chase.

At the same time, it conveys to the viewer the danger hanging over Ivan Tsarevich and his chosen companion. The background picture is not ignored by the author. There are trunks of large and century-old trees. Their branches are intertwined and can barely let the sunlight through.

On the right, the author portrayed a clumsy, but flowering tree, and in front a swampy swamp with blooming water lilies. What can mean the symbol of the birth of something bright, wonderful and hope for a better outcome.