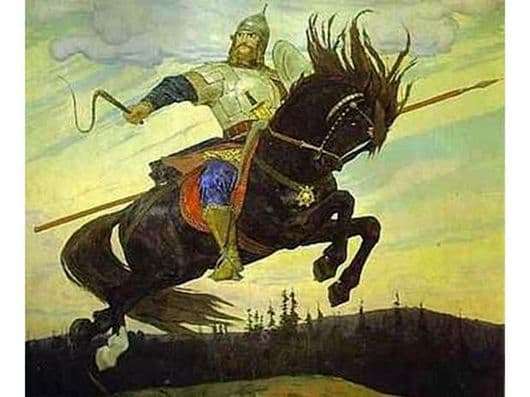 In his work V. Vasnetsov often turned to folk tales and myths. Most often, the central place on such canvases was given to the bogatyrs. The painting “The Bogatyr gallop”, created in 1914, was no exception.

In the center of the canvas is a horseman, resembling an epic warrior. He sits on a black horse. Vasnetsov managed to capture the moment of the jump, when the horse’s hooves broke off the ground.

It creates the illusion that the hero occupies all the space, from the earth to the sky. In the distance there is a forest painted in dark colors. Head rider touches the clouds.

The artist by the method of composition depicted the movement, the moment of jump The horse is completely tense, his legs are tucked in a jump, his head is slightly lowered. The rider turned to face the viewer. He so trusts the horse’s instinct that he does not even look where he jumps and does not hold a rein.

The painting was painted in 1914, at the very beginning of the World War, when no one yet knows what it will come to. The bogatyr is in full combat readiness – a sword on his belt, a shield in his hand, a spear at the saddle, his eyes fixed on the distance, looking out for enemies.

To create more tension, the background (forest, hill in the distance) is written out in dark colors. The picture captures the early dawn. The sun is about to rise, the background is already painted in various shades of red and purple.

Unlike many other paintings by Vasnetsov, the hero here is abstract. He has no name, no strictly defined goal or her choice. One of the artist’s goals is to strengthen the patriotic spirit in the new war, to show that this is not the first and not the last battle on earth. All this is further emphasized by the image of the vast Russian expanses – in fact, the trees are not small, they are just very far away.

In general, the picture for the artist is quite common. It is located in the Moscow house-museum of Vasnetsov.