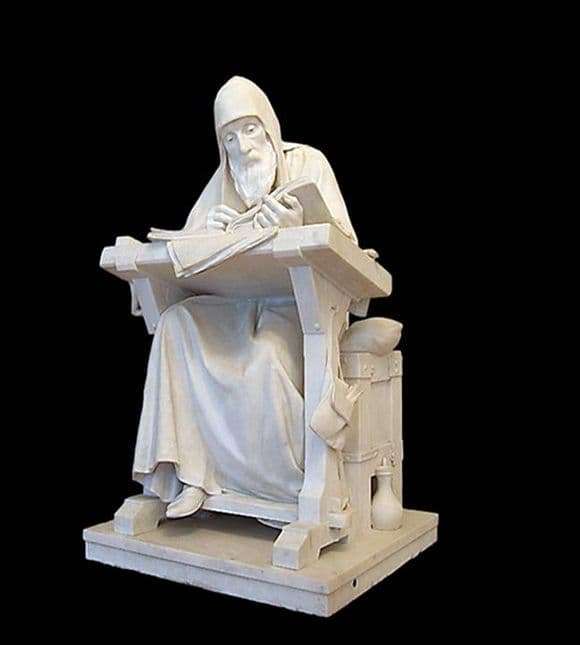 The work on the sculpture was completed in 1890 and made in a realistic manner. Chronicler, depicted sitting at the table. His head is slightly tilted, and the figure is natural. The look expresses sadness and meditation.

Nestor Pechersky absorbed in his work looks a bit tired and humble. The ascetic clothing of an old man is faithfully conveyed by the sculptor Antokolsky. He reproduces the soft folds of clothes, and the figure reflects light and shadow, which makes the image alive, one can feel the power of individuality in the expression of the monk’s face. Nestor – an old man and a monk-chronicler, a brilliant Old Russian writer who lived at the turn of the centuries of the XI-XII centuries, is captured in a marble image. He was the first collector of priceless historical information about the original Rus. Rev. Nestor came to the Pechersk monastery at the age of 17 years.

Kiev-Pechersk Monastery became for the young man a real school of life and enriched with knowledge of book wisdom. Talent and extensive scholarship combined with extraordinary wisdom. In this, he imitated Rev. Theodosius, the hegumen, whom he considered a model of monastic asceticism. Nestor joined the chronicle under the leadership of his mentor Nikon.

The information received from the Caves elders allowed Nestor to restore the picture of the original life of the monastery, and also to collect the heritage, life and instructions of Father Theodosius bit by bit.

At the end of his life, the monk undertook an epochal work about the people and the state – “The Tale of Bygone Years”, which became the seed for the subsequent chronicle and remained the main source of information about the history of the Russian medieval state.

The chronicle is not a simple historical document, in it he preached about the complete purification, the transformation of the individual through struggle. Until now, Nestor is the patron saint of all who study and work in learning.