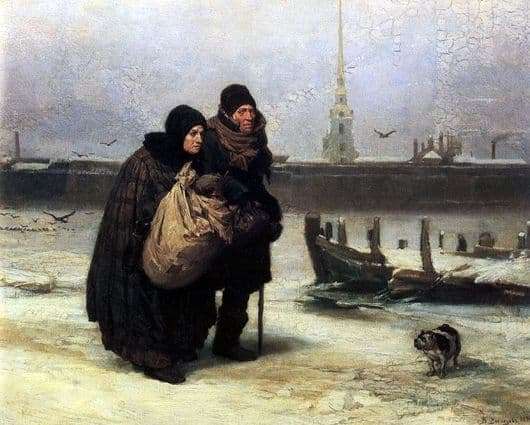 Of course, looking at this picture of the great artist Vasnetsov, you immediately understand what feelings the creator was trying to achieve.

The picture is completely saturated with feelings of pessimism and even part of the despair. In the surrounding landscape, in the background, it becomes clear that this is a rather late period, most likely an autumn one. The scene of the picture meets us in St. Petersburg. All this is understandable in the rear view, in which the contours of the great Peter and Paul Fortress are visible. Niva, which is already shackled by ice.

Looking at the main characters of this picture, an elderly man, who judging by his clothes is far from being rich, but at the same time not a poor man, most likely their family is somewhere between poverty and the middle class, perhaps even some very small official.

In whose hands there are not so many possessions, and behind me a poor salary, exactly the same pension, and most importantly the reason for their wanderings, the rising cost of rent. From all his views on his elderly wife, it is clear that he is very upset and feels guilty for what happened. His wife at this moment is completely unshakable and fully focused on the road.

Their dog walks alongside them on the road, being faithful to their masters all their lives, as they say in wealth and poverty. The artist, thanks to the exact location of the Peter and Paul Fortress and the route of these two old men with a dog, gives us the opportunity to assume that they are keeping their way, most likely from the more expensive housing of Vasilevsky Island, more cheaply, on the side of Petrogradka. All the sadness of this landscape, and emphasizes the overall dejection of the plot.

The artist, as closely as possible, showed us the whole essence of the experience, in such moments as: the presence of gray-yellow snow, the same sad and hopeless gray sky, Nevskie thawed patches, over which gulls slowly fly.