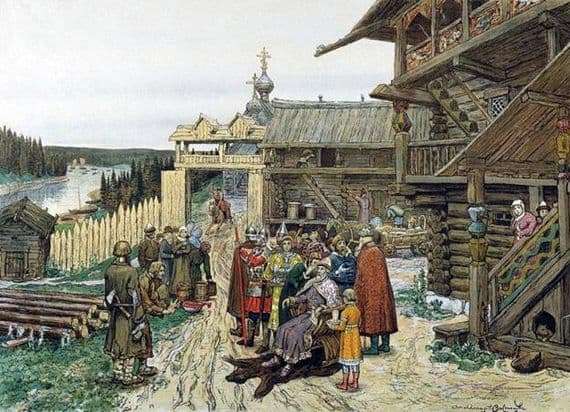 Apollinary Vasnetsov – Viktor Vasnetsov’s younger brother, master of historical painting, art historian. He did not receive a systematic art education – there was no money in the family to train two artists.

Therefore, he first took private lessons from the Polish painter Andrioli, who was exiled to Vyatka, his native village, then moved to St. Petersburg and studied with his brother and many other artists, each of whom gave him something of his own.

“The court of the prince” is one of his great works, which required him to apply all his strength and activate all his talents. The picture depicts a period of about the 12th century, when Russia consisted of many separate principalities, each of which was headed by its own prince.

On it is a princely compound, a high tower, depicted with a great knowledge of Russian architecture of those centuries, the dome of the temple in the distance, an open gate.

In the courtyard, you can see several separate scenes that are loosely connected with each other. The main one, to which the viewer’s attention is immediately turned on, is the prince, seated on the armchair made from the terem. His legs rest on the bear’s skin – this is both a symbol of power, and the border separating the prince and the earth; a boy stands next to him with bread on a tray, and confidants and guards crowd behind the back of the chair.

Before him – the peasants from the village belonging to the prince. They brought tribute – meat, honey, ears of corn grown on princely land. Women, men, they are a little nervous.

On the porch of the palace there are children of the prince – rich clothes, curious faces. The boy hangs on the railing, the girl relaxed leaning on them.

Tribute is disassembled to the side – not those symbolic gifts that were brought to the prince’s throne, but what was brought on the cart.

In the gate you can see the silhouette of the rider – the messenger who brought the message, and who knows, bad or good.

The picture breathes the spirit of antiquity, permeated with knowledge of past centuries.