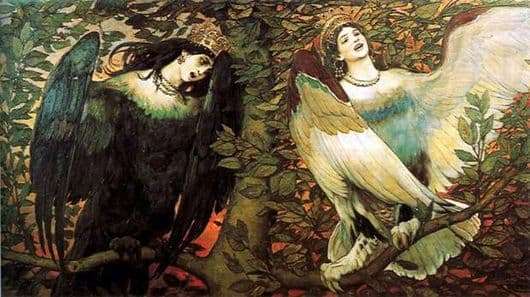 The work of V. M. Vasnetsov is a fairy tale, epic, myth, historical and folklore plots. Including frequent appeals of the artist to the ancient Slavic pagan themes. The famous painting “A Song of Joy and Sorrow”, completed in 1896, is no exception. In the center of the picture is a tree, on the branches of which two half-fingers sit – Alkonost and Sirin. The first bird promises paradise sometime in the future.

The second sings that paradise has already been, and it is lost. The image of them in the form of semi-bird semi-humans is traditional. Vasnetsov made a deviation from the myth – according to legend, Alkonost and Sirin were bisexual. At the artist, they have the heads of beautiful girls in crowns. Bird Alkonost expects future paradise. She has a smile on her face, colorful wings, depicted in bright colors.

One of the legends says that singing this half-finger comforts those who suffer. Another legend says that singing it is so beautiful that the one who has heard it will forget about everything. The artist managed to convey the mood of the bird – Alkonost does not feel herself when she sings. Sirin is heartbroken. If Alkonost is revealed, Sirin bows his head down. Plumage depicted in dark colors. The grief of the bird is further emphasized by bruises under the eyes. It is believed that the singing of the bird Sirin brings with it oblivion and death. The contrast is enhanced by the background. Birds sit on different branches of the same tree.

Next to the bird Sirin, the leaves turned black and withered, there were very few of them left. Around Alkonost foliage blooms in full color, as if enjoying life and the upcoming paradise. The oil painting on canvas is included in the permanent exhibition of the State Tretyakov Gallery. This is one of the most famous works of the artist.