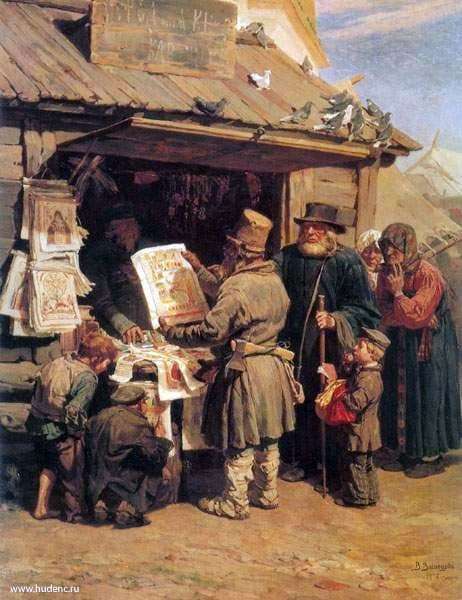 Vasnetsov is known to many as an artist who praises images from fairy tales and legends. But there is in his work and pictures of a different genre. For example, “Book shop”.

This picture is peculiar in that it merely reflects the completely realistic, mundane scene of the life of the simple Russian people in those times.

A large number of buyers gathered around the bookshop. Icons and images are hung on the walls of the shop for any taste – buy any. A man with an ax in his belt is interested in a bright picture, which he most likely chooses to decorate the house.

Near the peasant with an ax stands the venerable old man. He holds in his hands the staff on which he relies. He has a top hat on his head, a long cloak on his shoulders. Next to him is a boy, most likely a grandson. The boy is dressed neatly and in new clothes – wealthy people. In the hands of the boy there is a bundle, in one hand he already holds some kind of book. The elder looks wise and honorable, most likely, reputed to be local literacy. His hand points to some book, she asks the seller to give it to him.

Two modest women stand in line for the old man: one is already quite elderly, the second is younger. From the modest clothes and shawls wrapped around their heads, it can be understood that both of them are deep-believing ladies and literature here they will need appropriate.

On the left side, two ragged little boys crept over to the bench: they were looking at pictures, probably want to steal something. The seller does not follow them, busy with much more important things. The seller is dressed in beautiful, new clothes, already greyish and full, but, most likely, still not too old.

On the ledge benches crowded a flock of pigeons. You can imagine how loudly they coo and rustle their wings. These dynamic birds enliven the landscape, making it more realistic and mundane.