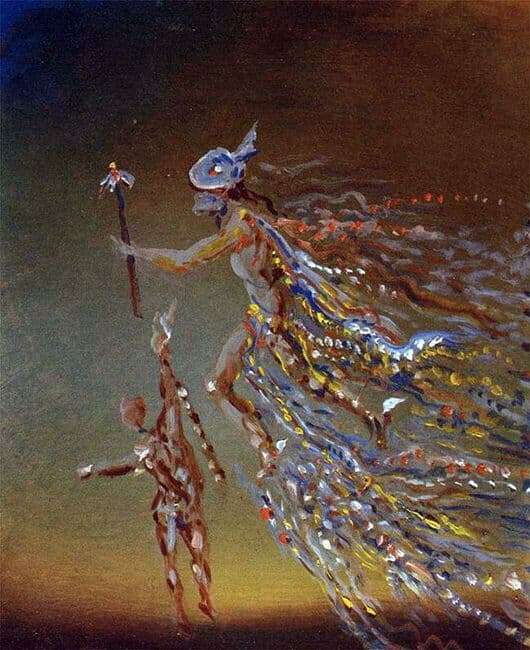 Salvador Dali is a painter from Spain, who is one of the most prominent representatives of the surrealistic trend in art. After Salvador Dali became interested in optical techniques, holography followed his passion, after which a masterpiece was released under the master’s brush, called Hermes. This work, like most of his paintings, is a flight of fantasy in its pure form.

Despite the fact that his style of presenting information through his artistic masterpieces is shown in distortion, you can still find an explanation for each picture, even the most intricate at first glance.

The basic idea of the picture is quite simple, for this it is necessary to build a small logical chain, which Dali followed while painting the picture. It depicts the god Hermes, who is the patron saint of wealth, income, commerce and wealth. The person who reaches out to him personifies a person’s thirst for prosperity and prosperity.

The picture shows that it is not so easy to succeed, not so easy to touch the happiness and wealth. Thus, Dali disguised the simple human truths of life, in rather bizarre and intricate forms.

For example, in this picture, the train that stretches behind Hermes can only say that well-being quickly rushes forward, and if you do not have time to catch him this time, then there may not be a second time. You should also pay your attention to the perfect transition of colors, from the bottom up, which has a slightly depressive shade with a slight color to hope, as evidenced by the bright colors around Hermes, like a certain aura.

Thus, it can be understood that all the pictures of this artist are fairly simple to understand, it is only necessary to delve into the process of transmitting information.