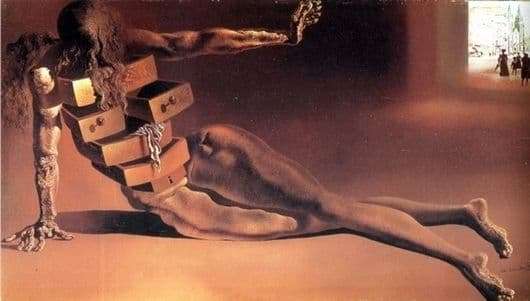 Dali and Picasso are two artists who shook the world with their completely different view of the existing canons of life. Both the one and the other had a completely different understanding of the world and therefore their creations are somewhat knocked out of our usual thinking. And if Picasso could somehow be understood, then Dali, not only by his creativity, but also by his behavior in life, caused either delight or total disgust.

But in this canvas the master made it clear how difficult it is to be an individual person. How hard it is to differ from the rest and not to be closed. See what happens, almost all the boxes of a person are opened, even the insides are visible, but a person is not ready to be as open as the crowd asks. And because he fell, and because his hand asks people to stop and not to approach. He asks about loneliness, he asks not to let him be in public again and again. This is because his “boxes” are empty, they have squandered their advantages.

True, you really won’t understand who is on the canvas – a woman or a man, but does it matter? Do we really don’t have such a moment when everything inside is empty and you don’t want to see anyone nearby? It happens. And apparently, Dali, too, this happened and because this canvas was born. She was born from the desire to remain alone for a while and fill up with new forces and new emotions, in order to resume her work again. It needed a pause.

Dali worked tirelessly. He created his own museum, engaged in architecture, design, canvases, that is painting. He just lived so full of life that he considered solitude a blessing. But he also got tired of him quickly, a few days of silence – and then again the frantic rhythm of work, meetings, communication with the right people. And only the death calmed down the genius and gave, finally, to him the long-awaited or unexpected peace.