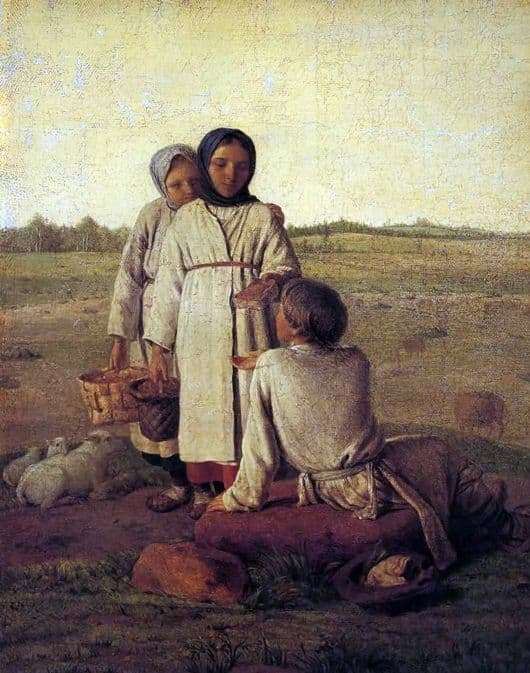 Alexey Venetsianov is a famous Russian painter. The fact that, having received no artistic education, he managed to become an influential artist and even create his own direction in painting is amazing. Peasant life interested artists before, but it was Venetsians who began to depict the peasants with love and affection. The life of the peasants, their master labor in detail transfers to the canvas.

One of the paintings Venetsianova peasant theme “Peasant children in the field.” The plot is simple, unpretentious, is the usual daily situation – two girls bring lunch, working in the field to the shepherd. On the canvas before the viewer appears summer day. The classic rural landscape stands in front of the eyes: lush greenery of the field, stretching into the distance, the horizon line overgrown with trees, and a soft blue, almost transparent sky.

Children’s figures are painted large, they are close to the front frame of the canvas. Children are poorly dressed, but neat and clean: light gray clothes are girded with a thin belt, girls have blue and bright blue kerchiefs on their heads. Children shod in simple bast shoes. The relationship between children attracts and fascinates the viewer, clearly visible tenderness and love. The older girl timidly, with constraint, stretches the bread to the shepherd. The second girl, standing behind, gently hugs the second by the shoulder and puts the head on it. Girls have baskets in their hands, which speaks of their tireless work and help to their parents. The expression of their faces is serene.

The landscape around is also calm, as if breathing serenity. Only a few sheep from the herd break this silence. Despite the ordinary nature of the events described on the canvas, and their regularity, the whole picture leaves an unusually warm impression, with its lyricism it penetrates the soul directly. The painting, written in the 1820s, is stored in the St. Petersburg Museum.