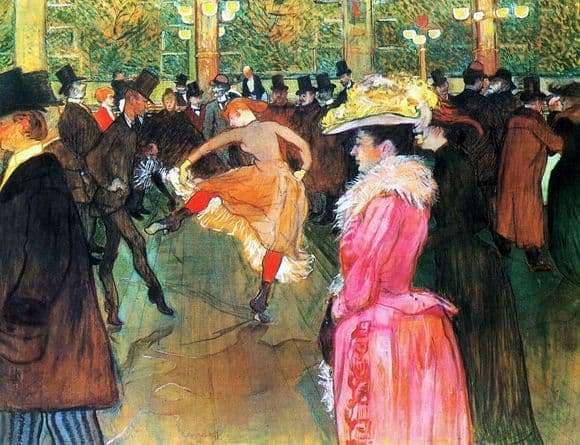 Henri de Toulouse-Lautrec belonged to a very famous aristocratic family in Paris, and his parents were always opposed to his passion for painting. But I must say that the artist Lautrec was not from a good life – because of a hereditary disease, he had a small stature, therefore he could not lead his usual lifestyle level.

The painting became his outlet, and the world of the Moulin Rouge cabaret fascinated him, especially since it was accepted as a normal person. Therefore, all the artist’s work was devoted to the people of the Parisian half-light – after all, these were his only friends.

Toulouse-Lautrec drew a lot of genre scenes from the everyday life of the cabaret. One of them he captured in a picture called “Dance to the Moulin Rouge.” It depicts the dance of two of the biggest cabaret celebrities – the dancer nicknamed La Gule, who possesses truly remarkable talents in the dance field, and her partner Valentine le Desoss, known as Valentine Boneless.

Lautrec doesn’t embellish his characters at all – their figures are made in a grotesque, almost caricature style, the dance steps, during which they are captured, are mostly devoid of grace. Around are the Parisian bourgeois with well-fed and complacent faces, among which you can find some Parisian celebrities of the time – almost all of them are made in the caustic satirical manner inherent in the artist.

Lautrec did not strive to align the composition – his works are like snapshots, moments snatched from the flow of time and transferred to the canvas. The artist simply depicted on canvas and paper what he remembered because of his beautiful memory. Some of the pieces on the canvas were cut for the reason that it turned out to be too big for the cabaret wall and was shortened somewhat.