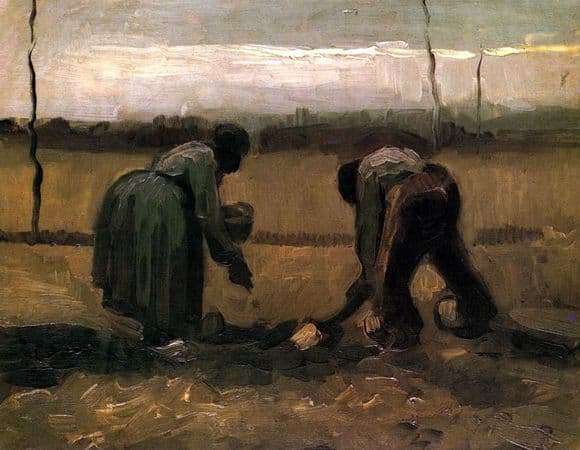 The canvas belongs to one of the early works of Van Gogh. The painting describing the work of the peasants, was created by the master in 1885. During this period, the artist struggled with himself: he was eager to master the classical techniques and techniques of painting, but the lack of education became an obstacle on the way. These failures were painful in the creative soul of a genius. More difficult for all Van Gogh were given the figures of people. The inability to depict a person on the canvas caused irritation and despair.

Difficulties with the image of a person made themselves felt the static nature of the images, the awkwardness of their movements. But at the same time, the figures, which were deprived of the dynamics, turned into a piece of uninspired nature around them, merging with the ground.

These features of the human figure found their reflection in the guise of a peasant and a peasant working. The artist depicted

them like two rocks. They amaze with their power and strong bond with the soil on which they stand. This effect is only enhanced by the high-level line of the horizon, which the artist has done intentionally. But in connection with the land lies the essence of peasant life: without the land of the peasant does not exist – then he is nobody.

Even shadows, long and dark, protrude as bonds, with which the peasants are tied to the ground. The low line of the horizon only tilts the figures even more, reducing the distance to the ground. Bent poses symbolize not the low position of the peasants in society, but their respect for the landowner.

Created in the spirit of realism, the canvas does not lose its integrity and deep meaning because of the slight awkwardness of the people depicted or inaccuracies in their proportions. The composition, as well as the color scheme, are in harmony, confirming the correctness of the color scheme.

The whole picture speaks of the artist’s deep respect for the peasants and their work. Monumental figures that stand so firmly on earth will not allow humanity and humanity to disappear.