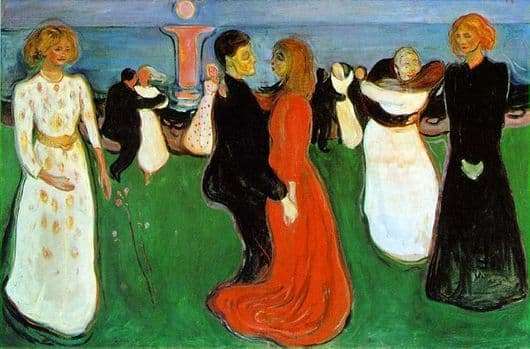 Norwegian painter played a big role in German expressionism. In his art, he tried to explain life and its meaning. His subtle visions of the soul and man can only be understood intuitively.

The Munch painting depicts men and women. Some couples have merged in dance. Along the edges of the same pictures are single women. On the left, a woman in a white dress is dancing. Her eyes are down. She is probably sad that at this ball she is without a pair. It symbolizes innocence, purity and integrity.

On the left is a woman in a black dress. Her hands are woven and lowered. The look is empty and a little scary.

In the foreground stands out a dancing couple of a man and a woman. Outlines of people are more visible than any traced details. It is noticeable that the girl put one hand on the shoulder of the young man, and the other she holds the hand of her partner. They dance tightly pressed against each other. The man is

most likely wearing a classic black suit, and the girl is wearing a bright red dress on the floor. It usually symbolizes beauty and love. In their dance one can feel complete commitment, openness and lightness.

There are several options for interpreting this picture. The picture describes the different states of a woman. On the left – innocence and simplicity in the form of a woman in white. Then a young and young period, where the girl is dancing coquettishly with a partner. On the right – maturity, already devoid of any hope.

According to another version, the emphasis is on dancing couples. The pair on the left is youth, i. e. they just entered adulthood. There are no duties before them, it’s just nice to be with each other. In the center – a mature couple. Their dance is full of leisure and thoroughness. They are already capable of supporting each other emotionally and intellectually and soberly assess themselves and their partner. An older couple is on the right. They are no longer so active, but they are wise by experience. These three pairs show past, present, and future.