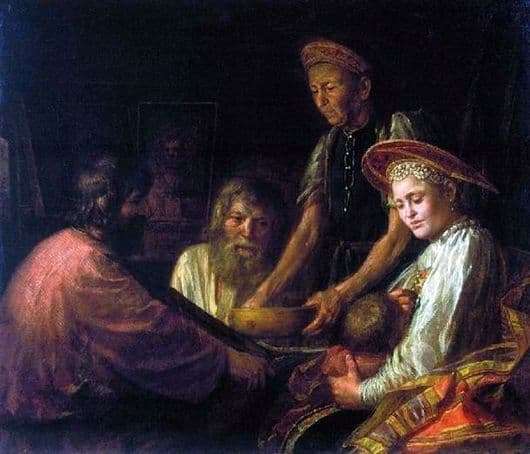 Though about Mikhail Shibanov, as a Russian artist of the second half of the XVIII century, little is known, he left behind cultural heritage. It is known about his connections with the almighty Prince Potemkin and the fact that he wrote iconostasis. But he entered the history of Russian art, thanks to his paintings “The Celebration of the Wedding Contract” and “The Portrait of Catherine II in a Camping Suit.” In 1774, Mikhail Shibanov painted the canvas “Peasant Lunch”.

This work was published during the Pugachev Uprising. By that, the peasantry at that time, had not yet been touched by anyone, and was even considered to some extent scandalous, since the students of art schools were not even allowed to look at the peasants in order to spoil the “elegant taste”. Of course, the painting “The Peasant Dinner” is far from describing the real life of the peasants, the work is too solemn and embellished,

Therefore, it can be argued that Shibanov was placed in some frames and could not fully reflect his vision. But no matter what, behind the screen of festive costumes and a certain feast, one can see the mother’s mother’s love for the child she holds in her arms, the sadness and pensiveness of the peasant grandfather, the cry of the Russian soul, all this shows the true side of the peasant life.

The work “Peasant lunch” is worthy of attention, if only because of the courage of the author, who, although in a somewhat veiled form, was not afraid to raise an acute problem, so the picture is of exceptional cultural value and deserves positive feedback.