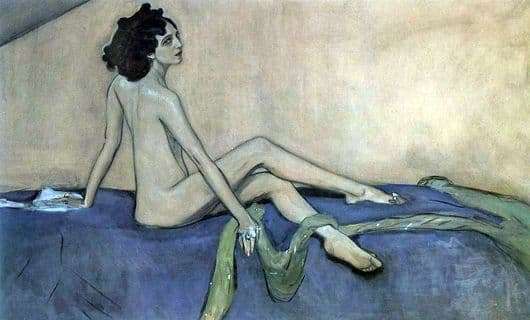 Created back in 1910, the picture of the famous Russian artist Valentin Serov “Portrait of Ida Rubinstein” reminds, by the nature of its performance, the work of old Italian artists of past centuries. And all because the features of the famous dancer, which was depicted in the picture, are very unnatural, because they are depicted very straightforward, which is a direct violation of all known canons of the academic painting genre, which most European artists of the last century strictly adhered to. The perspective itself is also broken in the picture, and therefore the viewer may get the impression that the dancer herself seems to merge with the wall, as if becoming even part of it. Moreover, it should also be noted that the artist himself even intensifies this effect in his picture on purpose, because he chose the same color both for the background and for the dancer’s body.

In the pose of Ida Rubinstein, references to the works of Renaissance masters can be clearly defined, to which Serov often turned in his works. Thus, the turn of the head of the dancer and her very difficult posture from the point of view of artistic execution clearly testify to this. The overall impression is complemented by Ida’s hairstyle, which reminds the viewer nothing but a halo.

It must be said that the general impression of this picture from the viewer should arise only after a detailed study of all its component and, above all, the features of the figure of the dancer herself, which is like the personification of beauty. Nude Ida Rubinstein is reclined on a blue-violet bed, nude, as if inviting the viewer to appreciate the deep essence of her beauty and grace.

The painting was painted by Serov with a focus on the basic principles of modern aesthetics, which were popular in those times.