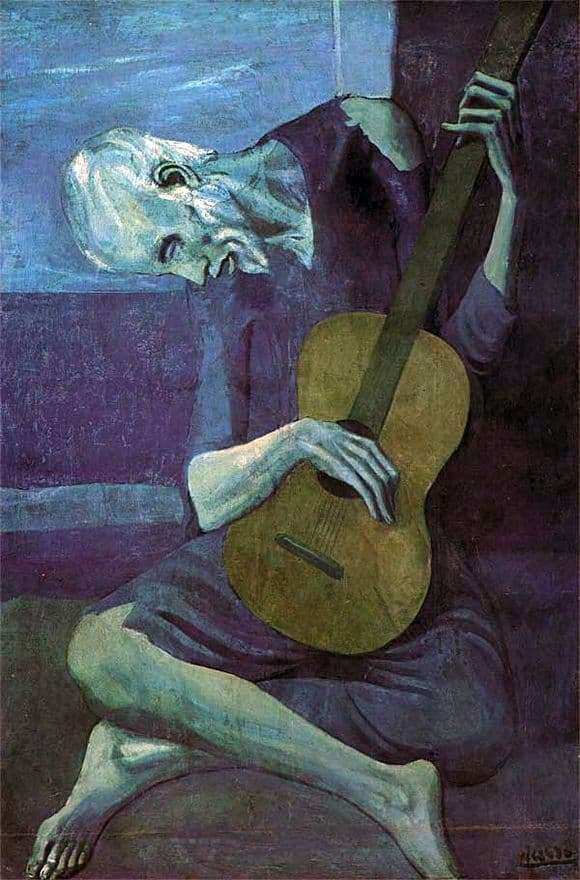 One of the most touching periods of creativity of Pablo Picasso is precisely the blue time. At this time, the closest friend of the artist passes away due to unrequited love, all the internal state of the master undergoes strong changes. Changing the artistic technique of writing pictures. The cold blue color – an expression of longing, frustration, good sadness, coldness – you can interpret it in completely different ways, but for some reason the artist chooses exactly the blue color palette. Drama, sadness, style of writing, color design – all that is characteristic of the “blue pore” Picasso, we see in the film “Old Guitarist.”

In ragged rags, having bent his back and legs crossed, the man we see in the Pablo painting is, in the opinion of many art critics, a tribute to another artist-mannerist, El Greco. The closed space of the picture as if forces this old man to bend, presses on him. The hopelessness, the feeling of pressure and endless loneliness lies in this canvas.

Thin fingers, outstretched hands – all this shows the physical weakness of the image, but with all this the elder is blind. It is worth noting that blindness is depicted by Picasso in many canvases, as a sign of complete helplessness and desolation. In this picture, depicting blind people, Picasso created in such a way that cause the greatest emotional response of the viewer.

It is noteworthy that when X-ray analysis of the picture on it was discovered the original picture – a breastfeeding woman, also written out in blue tones. Her figure was located right “behind” the old man, and also in the picture were images of a young cow and calf.