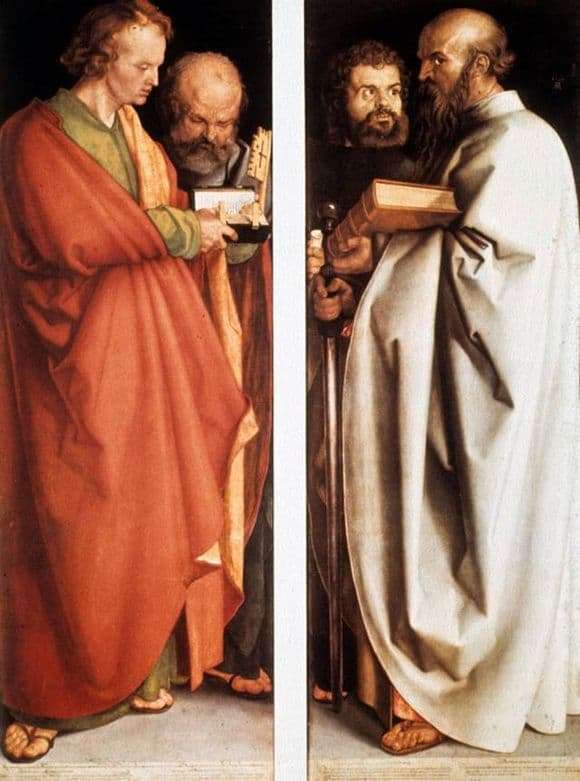 The painting “The Four Apostles” depicts the apostles-evangelists. From left to right stand John, Peter, Mark and Paul, standing very closely, on one floor, representing a single whole. Uniform both in composition and in aspirations. However, if we compare the apostles with each other, they are completely different. John is tall, with a high forehead – he is already starting to go bald.

In his hands he holds a book, looks for something in it with a tense and a little distracted face. He seems ugly – as happens with scientists who are too passionate about something. He represents a sanguine character. Next to him, Peter stands, with his eyes on the floor.

According to legend, Peter betrayed Christ, although he repented of it – on the night of Christ’s imprisonment, Peter was asked three times if he knew this man, and Peter three times, who had previously sworn allegiance to him and who was fanatical in his faith, answered “No.” In his posture, you can see heavy thoughtfulness, quiet gloominess, as if oppressed by his own fault, he was never able to say goodbye to her. He is a phlegmatic person. Next to him is Mark. Happily animated, he looks at the huge book that Paul is holding – most likely the Gospel – and looks forward to the work ahead.

To praise the Lord, to carry his word throughout the whole earth – to Mark this seems worthy of the application of all forces. Temperaturn, he seemed eagerly awaiting the moment when it would be possible to begin. He is a choleric.

Paul, standing next to him, calmer. He holds the gospel in his hands, in his second hand he has a stick on which he rests. He is dressed in white and looks stern and serious, as if asking the viewer what has turned their great march around? Did people listen to them? Believe in God? He is melancholic.

With all the dissimilarity of the apostles, with completely different faces, they all look the same believers and illuminates them from the inside with the same light.

The light that came upon them after the ascension of Christ, and made them more than brothers.