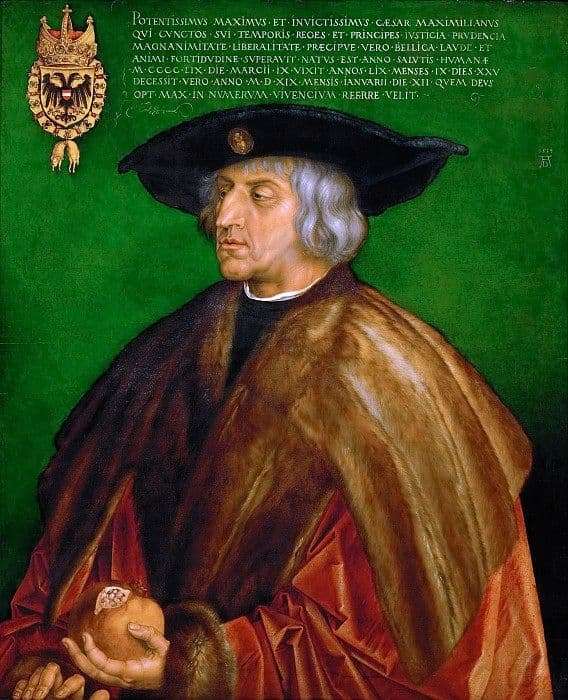 A. Dürer was born in a large family and his path to recognition was thorny. He married the artist mainly for the notion of his social status, for a long time his income was the sale of engravings. In adulthood, the artist acquired a patron, who became Maximilian I. Under his control, the author worked on the Arc de Triomphe. During this period, Dürer painted several paintings depicting the emperor. One of these works is a portrait of Maximilian I.

The painting depicts the emperor. He is dressed in a luxurious robe with a fur collar. On his head a classic hat for that time. Haughty facial expression attracts attention. The emperor was dissatisfied with something, it was typical of the governor, he had a very complicated character. Maximilian’s lips are clenched and his eyes are half closed. From portrait emanates arrogance. The emperor was pleased with the painting of Durer.

The treasury was empty, not always the ruler could pay for the services of the artist on time. He even offered to relieve him of taxes, but the Senate refused this request. Then the generous patron appointed the artist a lifetime pension. If the portrait satisfied Maximilian, then the emperor saw himself just as he was portrayed by Durer. In his hand, the patron holds a grenade. Since ancient times, this fruit was considered a symbol of immortality, rebirth and abundance.

Maximilian considered himself great and invincible, he believed in immortality. He, as a ruler, holds in his hand a fruit that promises fertility and prosperity. It is the emperor who controls these processes, he is omnipotent. Part of the peel on the fruit is peeled and you can see juicy grains. This denotes the diversity of personality, which is a torment for Maximilian.

Another pomegranate symbolizes the unification of many people under the patronage of the church. It was Maximilian who held all the power in his hand, which Durer so accurately and realistically displayed.